As we as a nation struggle to deal with a health care system under siege and an economy on a steep decline, one thing is certain. Coronavirus is not only infecting and killing but exposing a lot of issues that need to be addressed. What colossal conditions to be faced and, hopefully, lessons to be learned, despite this tragic ordeal.

The long-term physical, mental, economic, and social well-being of Americans and the nation depends on facing facts, truths and realities. This deep introspection and acknowledgement of some painful truths must occur at every level of government, business, and the public.

We only have to listen to a modicum of news to know that the United States was woefully unprepared to deal with coronavirus despite what we saw occurring in other parts of the world. Our leaders persisted in ignoring multiple warnings from multiple sources. What has resulted is the devastating reality that coronavirus is not only infecting and killing but exposing major inequities.

Those inequities include the alarming fact that many hospitals, nursing homes and front-line workers do not have the basic medical and personal equipment to take care of the flood of infected people that they are exposed to on an hourly and daily basis.

Those inequities include those individuals and small businesses that can least afford it no longer have an income or a way to make a living. Many have no idea how they will recover. 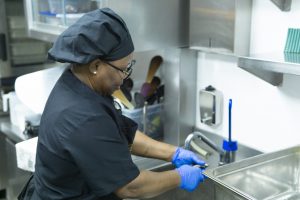 Coronavirus Is Not Only Infecting And Killing But Exposing
Photo Credit: IVAN ARAGON ALONSO

Those inequities include many school-age children left vulnerable who count on schools and teachers for not only learning, but also for much needed nurturing and daily meals because they come from sub-par living homes and living conditions. Coronavirus is not only infecting and killing but exposing, once again, the plight of the poor and disenfranchised among us.

Because blacks still disproportionately are poorer, lack access to health care, and they fill many of the low-paying frontline jobs. There are those among us who would like to ignore or pretend that America does not have a poverty or racial problem. But this healthcare crisis is saying otherwise. Coronavirus is not only infecting and killing but exposing conditions that still need to be addressed.

Once we get through this crisis, will the leadership and will we demand that these long-standing conditions be addressed? Those conditions include all Americans having access to health care insurance, the level of readiness of the public health care system to combat epidemics and pandemics. What real steps will be taken to address poverty and racial inequities that continue to exist? After we survive this crisis, then what?