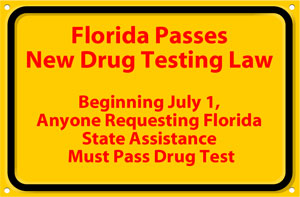 Is Florida’s welfare drug-screen law discrimination, politics or the American way? If other reforms receive equal precedence and significance, the new law requiring all adults to apply for drug testing could be a positive step toward real welfare reform.

Florida’s Governor, Republican Rick Scott, signed legislation requiring adults who apply for welfare aid to get drug screening. In signing the measure, Scott said, While there are definitely legitimate demands for public assistance, it is not fair for Florida taxpayers to subsidize drug addiction. This new law will help to prevent the abuse of tax dollars and will encourage private accountability.

The Florida welfare drug-screen law specifies that persons, applying for welfare (Temporary Assistance for Needy Families TANF), who test positive for illicit drugs are not going to be eligible for resources for one year or until he/she undergoes treatment. Those that fail the test another time would be ineligible to get welfare assistance for 36 months. Applicants must cover the evaluation, but will be reimbursed if they pass. (This law doesn’t affect the national food stamp system.)

Some Democratic politicians are calling it, downright unconstitutional. Some contend that when welfare recipients are tested, where will the line be drawn? Will families receiving Medicaid, state crisis help, or educational grants/loans also need to take drug tests? Others assert the law is an extreme and illegal invasion of privacy.

The Florida chapter of the ACLU noted a previous effort to test welfare recipients was ruled unconstitutional, and indicated they’re contemplating filing suit to challenge the Florida law.

Federal law permits states to screen applicants for drugs who apply for TANF, which provides a maximum of $300 per month cash assistance for needy families. The alternative has been considered by many states, but determined testing all applicants was not cost effective, according to a study by the Center for Legal and Social Policy.

For each of the preceding positions, if we really think about it, there are a couple of facts worth considering: Most employers require drug testing of applicants. Is that unconstitutional and an extreme invasion of privacy? While the government provides assistance, an occupation is provided by an employer, should either be used to support a drug habit something which could hinder keeping and securing gainful employment?

Drug use should not be, like companies, supported by taxpayers. Should the authorities, on behalf of citizens, employ a different standard to applicants who seek remuneration as a result of demand? The Florida welfare drug-screen law raises interesting questions.

Should government welfare plans exist for workers and those administrators who might have an interest in their perpetuation? Will there be a genuine interest in reducing the welfare roll?

What is the incentive to quit applying for TANF/welfare?

An issue that is even more important is raised by the last question: What will the governor of Florida, or other governors, the President and Congress do to pass policies and legislation to insure that people can really transition from welfare to gainful employment, level the playing field so the laws are good for companies and employees, the haves and the have-nots, likewise?

What do you believe?