Making A Difference Over Time 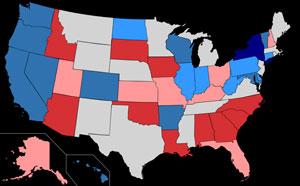 If we are not careful, our unquenchable thirst for the dramatic and the negative in our electoral process, coupled with our short attention span, will be our undoing. The hard work of putting solutions in place for the many challenges this country faces is something we must all keep at the top of our minds.

The business of governing must remain the first priority for those who survived the election blood bath. If you watched any of the races and the conduct of the candidates, you most remember the character assassinations and charges leveled (true or false), rather than what each candidate claimed they would do to solve the problems we face.

What is wrong with that picture? Our electoral process begs for reform, and a more stringent enforcement of adherence of the rules. Until we demand a campaign process that addresses the issues at hand rather than mudslinging, we, the people, will forever be short-changed. But that is a subject for another day. Back to the issue at hand. What now, after the November election is over?

November Election is Over

Too often, we forget the people that we elect after the voting process is over. We leave them unattended until the next election go-around, only to find that an individual and the lot of them have not done what we expected or needed. In two or four years, we once again find ourselves at the polls, where we take our “rightful” places ringside to personally view another mudslinging slugfest between these office seekers. November election is over. Now it is time to be about the people’s business

So what does that say about us part-time participants in our electoral and governing process?

Ensuring that the political process and our form of government, strives to achieve the greatest good for the largest number is not a spectator sport.

For those who voted, you made an investment, an investment that not only you, but each of us needs to watch and manage.

For those who chose not to vote, this election impacts your quality of life nonetheless, and while you were negligent by forfeiting your right to vote, you can still make a commitment and get involved, rather than leaving the choice of how your government works to others. It is not too late to make your voice heard, nor is it too late for you to help shape the course of things to come.

You can start by making your expectations, concerns, and desired outcomes known to those in power. Write a letter. Make a call. Send an email. Pay a visit. Do not just do it once. Include these actions on your “To Do” list, and place a check mark showing these actions have been completed on a frequent basis.

If we do not choose to become actively engaged on an ongoing basis, we have no right to complain about what goes on or does not go on in our government — at the local, state, or national level.

There is just too much at stake, not only now, but as well in the near and long-term future of our country and our rights and privileges as U.S. citizens.

Our government is US.