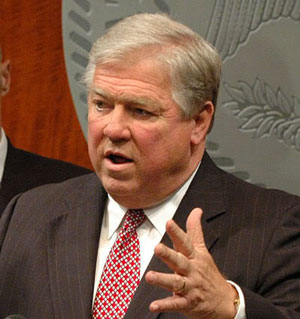 Race still matters in Mississippi and it is very evident in the Haley Barbour-Nathan Forrest Dilemma. There is a Mississippi organization,The Sons of Confederate Veterans, seeking to have a commemorative license plate named after a famous Confederate General. That within itself is not the problem. But the General they seek to honor is none other than General Nathan Bedford Forrest.

While Nathan Bedford Forrest earned the reputation of being a great cavalry leader in the Confederate Army during the Civil War, there are also historical accounts he served as the first Grand Wizard of the Ku Klux Klan, a vigilante group known for reigning terror. In addition to being a slave trader himself, Forrest became best known for directing the forces that massacred the African-American Union troops who had surrendered during the battle of Fort Pillow. Whether Forrest gave the direct order, participated in the massacre, or merely stood watch, has been fodder for historians over the decades. The present Governor, Haley Barbour, who is a possible Republican Presidential nominee,  has been appealed to by the NAACP to denounce this attempt to honor a man who, while achieving as an army general, also committed acts of atrocity against black Americans. Governor Barbour unabashedly and defiantly proclaimed to a reporter, “I don’t go around denouncing people.” When asked what he thought of the General/KKK leader/mass murderer in a historical terms, Governor Barbour said, “He’s an historical figure.”

Fast forward. We are reminded of the strain of race relations in Mississippi by the effort to have a special license plate honoring Forrest. The Sons of Confederate Veterans and the Mississippi NAACP are on opposite ends of the issue.

Barbour failed to express what he thought was the right and honest action to take, while he went on to say that he believed the state wouldn’t likely approve a Nathan Bedford Forrest license plate.

Was this the position that is right for a state leader? A leader who is also aspiring to become President of the United States of America?

On a broader scale: What justifies an honorable designation? What or who’s deserving of a national or state commemorative medal, license plate? Race still matters in Mississippi We surely need to be clear about the kind of harmful actions we will not honor.

Beyond the controversy of whether to honor or not to honor the deeds of Nathan Bedford Forrest with a special license plate is the looming question: When will we as human beings confront the fact that all people must denounce and get beyond racial hate and bigotry in all its manifestations. We’ve seen the price it has exacted historically and continues in our world today. And every times it raises its ugly head, progress is impeded by it, keeps us from moving forward.

What lasting value does it offer?