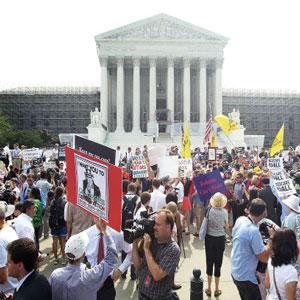 The Affordable Care Act lives and will not only provide health care for many uninsured Americans, but it will also help close the health and wealth divide between the working poor, the middle class and the wealthy.
The Supreme Court ruling on the Affordable Care Act, the healthcare policy passed by the Obama administration more than two years ago, has declared a historic piece of legislation constitutional and will finally make it possible for most Americans, whether white, black, brown, or yellow to have access to healthcare. Affordable Care Act lives.

In addition to making healthcare services accessible and affordable for those Americans who are poor and minority, it indirectly helps close the quality of life gap that goes along with the great racial wealth divide. Health, in many ways, means wealth. Surely, without good health, your chances of amassing any measure of wealth are quite slim.

So beyond breaking the cycle of millions of Americans being among the uninsured and denied needed healthcare services, the Affordable Care Act could also be the beginning of eradicating what has been a pernicious sub-class of Americans who are relegated to both a life of poor health and poverty. One condition feeds the other.

A federal study, Survey of Consumer Finances, released last week shows that during this recession between 2007 and 2010 families have not only loss a lot of their net worth, but the median household income has also seen a significant drop. The housing market and high unemployment are the direct causes for these changes in financial conditions.

However, what is notable is that the recession has also widened the racial wealth gap. While the net worth of white families dropped, the drop for black families was catastrophic. According to recently released figures from the Census Bureau, in 2010 the median household net worth for whites was $110,729 compared to $4,995 for blacks.

In addition to requiring that all individuals must get some type of health insurance, the bill goes a long way in evening the playing field of who gets healthcare services in this country and who doesn’t. The bill will no longer allow discrimination for those who  have a pre-existing condition.

In 2010, President Obama signed the Affordable Care Act to a round of applause. For many who relied on emergency rooms and urgent care centers to receive basic care, they will now have the means to access preventive or primary care, preventing a minor illness from becoming a catastrophic incident or an acute episode becoming a chronic disease.

Good health is a prerequisite to even trying to amass wealth at any level. One must be healthy to seek an education and to perform on a job. So the racial health gap and the racial wealth gap are inextricably tied.

It is not secret who makes up the uninsured in this country. Blacks, Hispanics, low-income whites, and their children make up the greatest number. The decades of high morbidity and mortality rates among these groups are proof of the health-wealth connection.

Imagine the long-term implications. Generations of children can now have access to necessary healthcare, allowing them to perform better in school, putting them in a better position to become productive adults. They will have a better chance to realize the American dream and continue to close the wealth and health gap of the many generations who have suffered before them.

Supporters and protestors outside the U.S. Supreme Court building on June 28, 2012 waiting to hear the final ruling from the Justices regarding the Affordable Care Act, speak to the importance of all Americans having access to healthcare. The health-wealth connection.