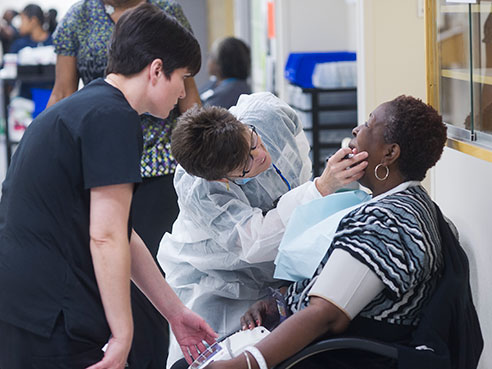 Healthcare for the poor, whether black, white, beige or brown, is hanging in the balance. The Supreme Court ruling on the Affordable Care Act, the healthcare policy passed by the Obama administration, can have an impact favorably or negatively on all Americans. Obama Care, as the policy is labeled, seeks to substantially increase the number of Americans that have health care coverage.

The Act has many significant provisions, among them non-discrimination for those who might have a pre-existing condition, no co-pay costs for seeking preventive care, letting children remain on their parent’s policy until age 25, a great value for those college years. But you’ll find other provisions that are needed. Healthcare for the poor could have positive results for generations to come.

Evidence abounds that we all pay — one way or the other — when emergency rooms and urgent care centers fill with patients who either have restricted or no insurance whatsoever. They do no have the means to access preventative or primary attention, preventing a mild illness from becoming an acute episode or a devastating incident becoming a chronic disease.

So why wouldn’t there be policy measures to not only supply healthcare services for most Americans, while also attempting to identify and handle health care costs’ continuing to spiral upward?

It’s no secret who makes up the uninsured in this country. Low income whites, blacks, Hispanics, and their children compose the greatest percentage of uninsured. Healthcare for the poor will benefit all America. Photo Credit: childenshealthcarefund.org

No, not all of these people are on welfare. Many work two jobs to make ends meet. The problem is that many have occupations that don’t offer health insurance as a benefit. So the hard worker not only works hard but cannot afford a day off if he/she becomes sick. So frequently, mild and acute health problems turn into devastating and continual disorders.

In addition, there are long term, cyclical consequences. One of the many challenges regularly faced by poorer children, imagine them performing at their best in school when they aren’t feeling well and their parent’s cannot manage the doctors visit or the medications to knock out a common childhood illness or disease. Imagine the unnecessary suffering among the poor and elderly.

America is still among the wealthiest nations on earth even while we are in a serious economic downturn. It begs the question, why do so many Americans lack sufficient health care coverage? And, why was there such a partisan political divide to try and find a solution that had both favorable humanitarian and financial results?

Making a combined effort to reduce the number of underinsured and uninsured should be a portion of the legislative agenda at all levels of government.

If the Supreme Court strikes down Obama Attention, every American should demand of the Americans’ official’s specifics in what they intend to put in its position, should they stay in office. Listen carefully for their replies. What exactly is their plan for making health care coverage accessible for forty-seven million Americans?

The depressing fact is access to adequate health insurance coverage is counting with the consistent unemployment rate, more than 47 million and out of reach for many Americans. Yet, ever since the Affordable Care Act’s passage, the non-stop partisan clamor continues, with lawsuits filed against it. And, lo and behold, it is now in front of the Supreme Court for a decision.

On Thursday, the Supreme Court issues its ruling. What’s most at stake is the provision that mandates all individuals get some type of healthcare coverage. What’s wrong with that provision? Is not having car insurance a requirement?

Too many American’s, future and current generations, health is at stake.