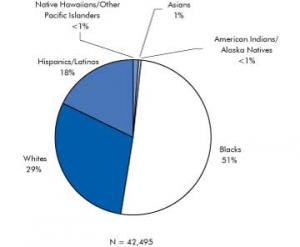 Blacks impacted by HIV-AIDS are greater than that of whites, according to a CDC report. It’s axiomatic that whatever threatens the majority community, frequently weakens and is much worse in the African American community.

Sadly, just as the disparate morbidity and mortality data of a number of other ailments and health conditions among white and black Americans, HIV/AIDS follows this routine.

The Centers for Disease Control (CDC) reports that African Americans represent about 12 percent (in 2007) of the U.S. population, but also continues to account for a higher percentage of instances at all phases of HIV/AIDS from infection with HIV to death with AIDS compared with members of other races and ethnicities.

But that’s only a portion of the devastating image. Blacks impacted by HIV-AIDS paint a very grim picture.

The report continues: Nevertheless, among youth, ages 10-14, most AIDS analyses, 61 percent, were received by females.

This last stat is the most alarming of all. Just how can we expect to prevent the ravage and disperse of this most brutal disorder if 10-14 year old teen females are being changed at an alarming speed?

Where are the parents, teachers, neighbors, the clergy, the hamlet? Where are we neglecting to prepare our kids and shield them from this delusory, insidious robber of innocence, well-being, and life in the village?

It’s going to take all people to cease the spread of the kiss of death that’s seducing our children because of ignorance, negligence and denial.

If we don’t intercede, we at best are in refusal, at worst guilty of neglect.

Yes, as parents, teachers, and caring adults, we may all fight with questions and problems of when to discuss sex and reproductive well-being with kids let alone run the danger of traumatizing or instilling panic having a discussion of HIV/AIDS. But we can ill afford to do nothing. We have to get the proper time, the correct equilibrium in when and how you can openly and frankly talk about the issue. But discuss it, we must.

How many more 10-14-year olds can we manage to let to be victimized?

How many more can we sentence into a horrid sickness and abbreviated life.

It’s distressing to envision. The reality can just be so much worse.

Picture a physician suggesting your child, grandchild, child of a close friend or co-worker was identified as having HIV/AIDS due to sex!

Shouldnt that be enough for us to intercede?