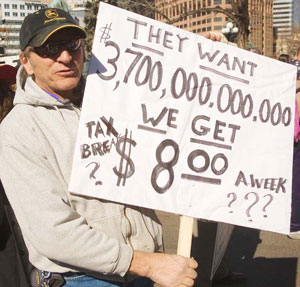 Common sense is AWOL in the United States Congress. Unlike our brave men and women coming home from Iraq after serving and getting the job done for their country, we cannot say exactly the same about our elected officials here at home.

In the Halls of Congress, we see our elected officials take actions, or no actions at all, that defy common sense, resulting in repeated refusal to pass legislation that is needed. What are sensible, average citizens to do when the elected officials they chose to represent them fail to?

While the option to revolt might not be a practical one, succumbing to cynicism and oblique resignation aren’t either. It causes one to wonder what our founding fathers, and great leaders that followed them, would make of modern American politics. Some of them, without a doubt, are tumbling. The bulk of them long quit rolling over in their graves.

There are many recent policy decisions, or the lack thereof, that could readily qualify for the Grave Tumbler Award. The last minute choice about the national debt that cost us our “Triple A” Credit rating, and cast our economic stability on the world position in doubt is just one of them. Failure to pass a much needed Jobs Bill is another.

A couple of other noteworthy examples come to mind. While the national deficit increases, arguments rage on about how not to close tax loopholes for the affluent but rather to continue to give them unfair tax breaks. What’s wrong with setting into place an equitable and rational tax code: A code that requires each citizen pays his or her fair share? The revenues are desperately needed by the state. Recent surveys show most Americans agree with passing measures to be certain that we all pay our fair share of taxes to increase the revenues that we desperately need. Continuing to extend inequitable tax breaks, especially for the most of the wealthy among us. Tax Ingratiation Without Representation, must end.

To add insult to injury, we can find billions to fund wars on foreign land even invest in rebuilding foreign countries yet we attempt to realize savings by slashing or neglecting to supply much needed national programs for veterans, the aged, children, the poor.

It prompts a more comprehensive philosophical question by what drives the fiscal choices.

One is almost tempted to circulate free copies of Thomas Paines “Common Sense” merely to remind ourselves of what government should be about. It would remind us that we cannot afford to relax and always elect those who don’t represent us and protect our interests.

Did you actually intend to elect someone who’d rather cut education financing for our children, jobs, Medicare for the aged, and services for our veterans as opposed to looking at options that are practical to raise revenues? What about the immigration morass? Policy makers are very comfortable playing the ignorant, bigoted, or befuddled game. Immigration is an issue which could possibly become very divisive for the country.

In many cases, we elect representatives who vote or fail to vote on a measure whether they understand it or not, or perhaps not competent to provide you with a clear rationale regarding why they vote as they do? Call them choices that are faceless. Unfortunately, most of them haven’t a clue about how their choice will really affect the lives of ordinary citizens.

Shouldn’t we require every aspiring candidate to take a qualifying examination like many other public service professions to make sure that they understand the fundamentals of how government works, what this means to be a representative of the people’s needs, and not only capable of, but obliged, to make good policy decisions? The question is begged by the behavior of this present Congress.

What are we to do? Certainly letter writing, telephone calling, faxing, emailing, and testifying haven’t impressed the will of individuals. Our elected continue to believe that they would rather set the desires of powerful special interests above what’s best for children, families, and companies.

Like our forefathers and mothers, we have options. There are a couple measures worth noting.

For those whose elected officials who are able to differentiate a great choice from a poor one, we are now able to start to compile and analyze their voting records and determine if they are worthy. We can even start now to find better nominees. To put it differently, enact a plan to throw out the space holders that are unthinking, unreasonable. That’s a short-term option.

Second, we can appeal to the like-minded among us. Never underestimate the power of the citizens. We have power in our voices and our signatures. Maybe it’s time that we explore just how to effectively mandate that elected officials be better stewards of taxpayer dollars. Through an initiative petition campaign, propositions can be passed; city charters and state constitutions can be changed. That is a long-term option.

We, the people, can do all of the preceding. We have to do something, when we look at the impact on our civil and civic society.