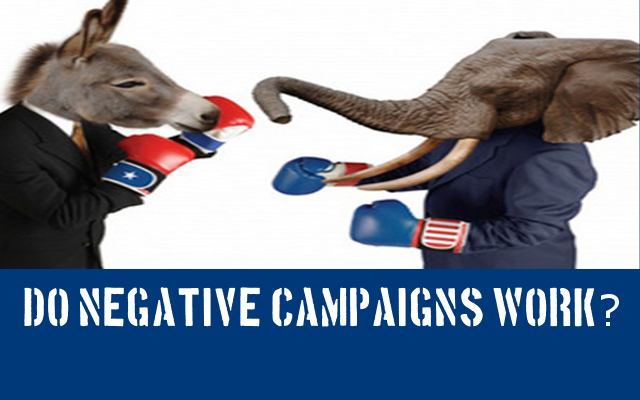 To negative campaigning, the public can just say no. No to the notion that we have become a society who would rather be entertained than informed as we go about the business of governing. No, to the sensationalism that has replaced rationalism in its power of sway in regards to our collective decision making procedure in choosing our leaders.

Not to do so would be to continue to allow the amazing power of the people, the public, to be debased and minimized. The stakes are much too high. The effects are much too exacting.

During the upcoming elections, the public has an excellent opportunity to reclaim its rightful role in political decisions and how policies are made at the national, state, and local levels. We can and should elevate our election process, imploring the honorable within and around us, decrying and rejecting the base.

Much, too much, is riding on who we choose to lead the most powerful nation in the free world.

One has only to examine the disposition, the Republican primary arguments, and actions in Congress to understand that this could be among the most negative elections. Imagine months of distortions and misinformation. To negative campaigning, public should say no. Photo Credit: usaonrace.com

However, where does the blame lie?

If political action committees from industries and major corporations, labor unions and other special interests groups cannot spend their resources to disseminate factual information to educate and inform, then the public needs to recognize in whose best interest they are operating and respond accordingly.

But casting a vote is just a small part of carrying out our obligation to be good citizens. Good government and powerful governing is a continuous process.

We, as a public, must send a resounding message to any nominee at any level that we cannot be duped, taken for granted, or misled. We are not interested nor will we be tolerant of in any blood baths or sideshows that are extraneous.

It is time for us tune out and turn off messages that pull at our emotion rather than our sense of right and reason. It is time to hang up on telephone calls from any camp where the truth is at best, distorted, and claims are not backed by facts.

We can be proactive. We can write a long letter or a simple word, send it by e-mail or regular mail; we can make a phone call or attend a town hall meeting. There are numerous ways we can let candidates understand we are more interested in meaningful discussion instead of mud slinging.

Rather than taking the perspective that the republican and democratic presidential nominees are fait accompli and that we can take a holiday in the political process until November, we can use now as a teachable moment for our leaders. Encourage our young people to get involved, keep the candidates focused on the issues that are important. Turn around what’s become a perennial tide.

With the first Republican presidential primary scheduled to take place as early as January 3 we’re in for a long haul.

Amid all the fuss and fury starting with the presidential nominees and carrying it through the candidates for the U.S. Senate, Congress, state, and local offices ask what will they do about those problems that are important to you, your children, your grandchildren. Exactly what will the presidential candidates do about jobs, the market, an equitable tax code, health care, education, the menace of terrorism, gun control, drugs, fulfilling the needs of youngsters, building strong areas, and others, protecting and strengthening families?

Use this time between the elections and now to find out.

Many elected and would-be elected officials have grown comfortable in the idea that we have been gullible and will believe whatever sounds credible whether or not it is grounded. Many politicians bank on the fact that for most of those that vote, that single act will function as the sum total of their political engagement. Consequently, after the vote, many elected officials feel no or little responsibility for what they do or neglect to do. Fear of suffering any repercussions just happens before the next election and is iffy at best.

Predicated on our action, or inaction, we get government and the leaders.