We are in a most unusual political season where the Republican Party’s front runner for President of the United States of American can get away with almost saying anything, whether factual and truthful or not. That is for starters. Much of what Trump says is not only far from being the truth, much of it is also delivered in the most offensive and insensitive way possible.

Mr. Trump’s untruthful claims are recklessly spoken with no apparent or real consequences. He continues to lead in the polls. Have you seen any of his boisterous declarations vigorously challenged by anyone in the media, during forums, during his rallies, and rare meeting with the press Corp? Some political pundits with allegiance to or alliances with other candidates may cry foul immediately following Trump’s ridiculous statements, but even their cries fade.

When he declares “Things are terrible in America,” is he asked to provide examples and the facts that support them? Why isn’t he asked for evidence when he claims illegal immigrants are “rapists, criminals, and the Mexican government is deliberately sending them to America?” Where is his proof? Not only does Mr. Trump not present any evidence to support his claims, he boldly repeats them. 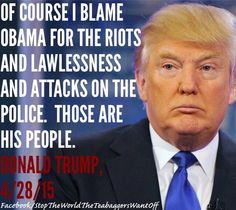 Donald Trump and truth. Where is the accountability?. Photo Credit: pinterest.com

What about the latest claim that he saw thousands of Arab Americans celebrating in New Jersey in the aftermath of the terrorist attack on 911? What about the claim that 81 percent of crimes against whites are committed by blacks.

What other candidates get away repeatedly with making ill-conceived half truths or totally false statements?

Donald Trump is leading the Republican candidates for President of the United States. What does this say about the people who are showing unwavering support for him? Do facts, truth, temperance and respect have a place in their value set? If not, the future political direction of this great nation is on a perilous and slippery slope should Donald Trump succeed in becoming the Republican nominee for President of the United States. Donald Trump and truth, where does it lie?

What does that say about the composition, political direction and future of what was once the Grand Ole Party? If this is where the GOP has devolved, it is surely on life support, and either need life-saving measures or be allowed to die, and a New Republican Party (NRP) put in its place.

Abraham Lincoln and Ronald Reagan. What has happened to the Republican Party during the last decade? It is a painful thing to watch even from the grave.

Donald Trump who runs loose with the truth, with little or no negative consequences, who spews personal insults against his fellow opposing Republican contenders and members of the press core alike, is leading the pack.

How can a Trump win possibly make America great again, as his campaign slogan proclaims?

Donald Trump and truth, where do they intersect? Where are the consequences? He seems to be able to say almost anything and gets away with it as he runs for the highest office in the land, if not the world, which requires the utmost accountability.