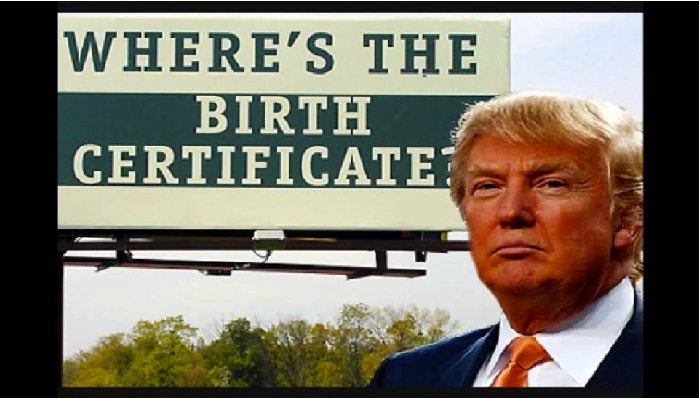 Donald Trump the birther is yet again pushing the charge that President Barack Obama wasn’t born in the United States, despite an earlier harangue by Trump, which resulted in President Obama releasing the long form of his birth certificate.

With this recent resurrection of the birther’s claim comes his support for Republican presidential nominee, Mitt Romney.

Is it in the name? Could it be because more than 25 percent of Americans consider he is Muslim despite his continued avowal doubt he was born in America, and that he is Christian? Or, is it because he is the very first black President of the United States, and every effort valid or not is a way of creating doubt to keep him from getting re-elected?

Unlike any other president before him, President Barack Obama confronts consistent challenges regarding his place of birth, which many believe is a shameful approach to prevent his re-election. It started when he won the Democratic Primaries in 2008. The claim originated with prospective political adversaries, and Republican elected officials, conservatives, many fringe activists. Republican members of Congress and state legislators proposed and voted for legislation that would require presidential nominees to provide documentation of these qualifications to be president. Lawsuits seeking to disqualify Obama as President were rejected by the lower courts, and three suits were dismissed by the United States Supreme Court.

Despite the state of Hawaii releasing an official birth record, the paper announcement of arrival submitted by the hospital where President Obama was born, and the findings of fact-finding reports of journalists from around the world who affirm that he was really born in the U.S., there are still people who continue to claim that he wasn’t. Why?

Name one other president who had to produce a birth certificate to confirm that he is a natural citizen of the USA. Why is faith and the birthplace of President Barack Obama persistently challenged?

As fair-minded and honest citizens, we seriously should examine the underlying reasons, and really comprehend the motivation behind these questions; what good will come of these tactics for the American people?

Is not President Obama’s birth certificate proof enough? Donald Trump the birther, along with many others, seem not to think so.

The next issue to resurface, undoubtedly, will be his spiritual faith. After all, last week, Romney supporters were strategizing about how to revive the President’s past controversial pastor, Jeremiah Wright. Over the airways, the undocumented claim that President Obama is Muslim is spoken with reckless abandon. Why do political leaders and the media still proffer misinformation about his religious faith?

Could it be because Obama doesn’t wear his spiritual faith on his sleeve and is not seen worshiping every Sunday at a Church in Washington, D.C.?  Did people question other presidents who didn’t go to church including President Ronald Reagan? Do we understand the religious affiliation of all our previous presidents?

We surely have never questioned their religious beliefs, or where they were born, and questioned it doggedly.