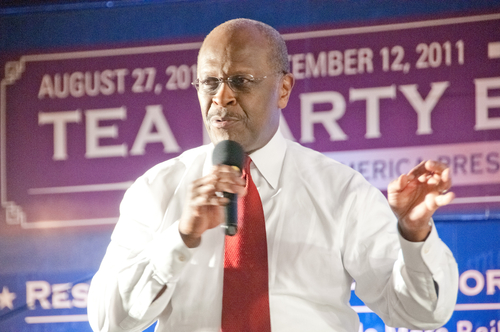 Herman Cain and the Tea Party, what are we to make of this alliance? While many Americans may be scratching their heads about how Herman Cain, a conservative black man, has become the front-runner among Republican Presidential nominees, it begs another question: Has the Tea Party movement trumped the problem of race in this nation at least for the moment? Or, does racism, like politics, make strange bedfellows?

Many observers would claim the latter because many perspectives held by components of the Tea Party and Herman Cain have now been called racist. The most recent is the extreme views how illegal immigration should be managed are shared by Herman Cain and Tea Party members.

You may recall how fast Governor Rick Perry, who joined the campaign late, instantly became the front-runner because of what many considered were his viewpoints that are religious, economic, and socially conservative. The top place was held by him until he expressed his views about educational support for the children born to illegal immigrants in America.

While many of us cringed this weekend upon hearing Cain’s pronouncement, should he become President, that he’d solve our border issue by erecting 20-garrison fences with rolling electric barbed wire to discourage illegal immigrants. He pronounced to a cheering crowd, that a sign would be posted by him, “This fence will kill you.”

But, it really doesn’t stop there. The Republican Party, along with the Tea Party component, in recent years are becoming known as the socially, politically, economically, conservative element in the public policy arena. It’s long lost its historical tenets and image as the party of Abraham Lincoln. When Herman Cain says there isn’t any reason why everyone who desires a job can’t get one, or any one can become wealthy because discrimination and racism no longer exist in this country, wouldn’t you, as a social conservative, shout for joy? If Herman Cain, a black man, declares no more smaller government, and entitlements, dispense with the current tax code, wouldn’t you as a true conservative say regardless of what I think about black folks typically, I enjoy this one?

But, on the brighter side, irrespective of your political leanings whether liberal, conservative, progressive, Democrat, Republican, or Independent you cannot deny that race, ethnicity, ethnic groups, seem to be trumped by mutually political views even if many are deemed racist. That within itself is an excellent lesson about mankind.

Maybe the white southern farmer, in the audience when Herman Cain was talking in a town said it all when he said he was supporting the perspectives of the people and Cain because he represents me.

With his meteoric rise in the polls, it’s clear that Herman Cain’s skin color has nothing to do with it, and this is a great asset to push the cause boldly or under the radar.