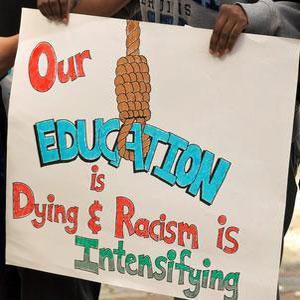 Is racial tension increasing? in America and across the globe? Hardly a day goes by without some report of a racially-motivated incident. They often cut across socio-economic class and age. They are not confined to urban ghettos, but commonly include suburban areas, hamlets, soccer fields and country clubs.

These occurrences rarely make the front pages of newspapers or the evening news. But they beg for our attention nonetheless.

Only this week we saw episodes of racial graffiti plastered across buildings on a Montana university campus, and on dwellings in New Hampshire. On the door, a pupil at the University of Montana found a white supremacy bumper sticker on Monday. Last week, they found discriminatory messages stuffed into novels in the African-American section of the university’s library. Is racial tension increasing?

In Concord, New Hampshire, the FBI is investigating three incidents of messages left on homes calling the families who lived in them subhuman. The dwellings were those of African immigrants. On the positive side, white neighbors, appalled by the messages, helped to remove them.

But the United States is not the only country where such episodes occur. On a welcome sign at a popular park and on the entry, racist graffiti was scrawled in the UK. The UK has also found itself in the throws of racist comments against Asians and Indians, while blacks were targeted by these incidents. Most notably, the incidents that occurred at the polo club where Prince Charles is a member. Is racial tension increasing?

Racial insensitivity is also playing out on the cosmetic and confectionary industries, causing firms to pull the packaging and advertising that some groups find offensive.

Racial slurs usually are not confined to older generations who should know better. Cyberspace is pervaded by them where the quite young live. The results of a MTV poll released this week shows that young adults and teens frequently use bigoted slurs and racially derogatory names. However, 54 percent of young people think it is fine to use such racist terms people among friends, while they acknowledge that use of such words is discriminatory and wrong.

The survey found the derogatory language frequently used online by young folks is not confined to racial groups, but such language is regularly used against homosexuals, girls, and the overweight.

Where do we break the cycle of social discrimination and insensitivity and wanton racism? Clearly, some incidents are clear and in your face. But how about the ones that are equally as pervasive in our communicating media?

It’s alarming to believe that we are regressing, if not losing, the fight against creeping racism in all its forms and facets, across all races, black, white, brown, and beige.

When we look at all the challenges we face as one human-kind, we can ill afford to lose the war.