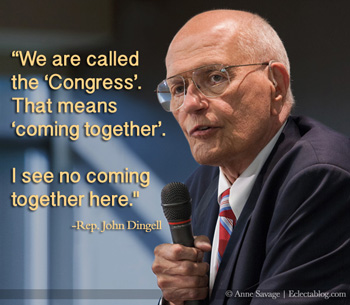 Holding Congress accountable should be among every voting citizen’s top priorities. About a year ago, the 113th United States Congress was sworn in to represent us, we the people. But this is no different than the last Congress and all who came before. Why are we not holding this Congress responsible to make choices that are in our best interest?

The billion dollar question: Will we hold the 113th United States Congress accountable, or continue to have them get away with doing nothing or little?

Every two years, we have the chance to choose someone to go to Washington to make certain that the problems that affect the quality of life in our city, community, and household are taken into account when policy choices are made and dollars are spent. But we consistently fail to hold the Congress we elected responsible. We will have that opportunity in 2014, about a year from now.

After voting, what have you done or what are you going to do to ensure your Congressional representative is looking out for you and not his or her biggest donor, or party affiliation?

The result of the 2012 election should be evidence that money isn’t all strong. The people’s vote was the power that ruled the day with the outcome of the U.S. Presidential election, as well as many contested elections in the U.S. Senate and House of Representatives despite the unprecedented amount of money spent.

The outcomes should trump the growing cynicism about whether our political process works.

But the result of the elections was merely the beginning. Our real work as citizens had started. We should have long ago participated in holding Congress accountable.

If any doubts exist, merely review the deficiency of performance of the last United States Congress in addition to the current one. The last Congress disappeared into the annals of history among the worst, most ineffective, “Peoples House” since the foundation of the Republic. We failed in holding this Congress responsible, and it’s on the road to following suit, with the lowest approval ratings in Congressional history. But really, who is to blame? The People, the people. The United State Congress represents us. They are elected by us and then we leave them to bask in their private and partisan bickering, while we the people, endure a fighting economy, chronic unemployment, look inept as a nation, and lose enviable credibility on the world stage.

Without a doubt, divisiveness and partisan bickering have blighted Congresses of ages past, but, nevertheless, the country found away.

But during the last three years, we’ve sat back and watched from the sidelines as America aired its dirty underwear.

There’s been a perpetual parade of disrespect of the Office of President – unprecedented in American history. But then so is Barack Obama as the first African American President.

Getting the nation’s fiscal house in order has taken a second seat to the strident and fervent efforts to maintain antiquated and irrational political philosophies while the country’s, and to an even greater extent the world’s, economic health continued to drop.

To ensure the access to healthcare services for most Americans took an act of the Supreme Court, which was dubious at best. But a dubious act turns out to be better than a negative one.

The single way to have avoid a repeat of the functionality of the last United States Congress was to hold any new Congress responsible.

Will we? Or, will it be business as usual as we sit around and complain? We only have a year continuing with the present Congress.

If we get another two years like the last three, and if we fail at holding this Congress accountable, re-elect them, we’ve only ourselves to blame.