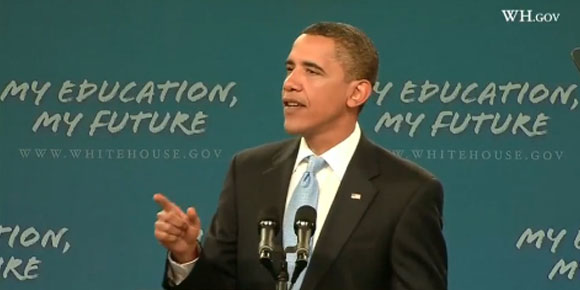 The Obama message to students on the importance of educational achievement seemed to have caused an uproar. What are we to make of it?  Is race a factor? Is partisan politics all there is?

Since when is the president of the United State talking to kids, encouraging them to stay in school and study hard, such a controversial occurrence? Every rational and concerned parent and every caring adult would welcome a message from their President , the leader of the free world, about the significance and importance of educational accomplishment.

Now, here comes President Barack Obama doing the exact same thing and unexpectedly he is being accused of what is tantamount to treason, not only trying to indoctrinate Americas kids to the worth of socialism, but also recruiting them to be his small foot soldiers to advance his policies on health care and whatever other communistic plan he comes up with in the long run.

Obama’s message to students about the importance of education, what is the issue?

It begs the question why wasn’t there a similar outcry or amount of indignation when other presidents spoke to students? Reporters and talking heads want to point to the truth that Democrats protested when President George Herbert Walker Bush addressed students. What they neglected to notice is the protest, if it the reaction can be called that, paled in comparison to what’s taking place with President Obama.

Where was the demonstration when President George W. Bush took his No Child Left Behind address to the schools?

President Obama could be the final man to suppose, at least openly, about whether the nasty side of race and racism is at play here. But it’s extremely hard to suppress the idea.

Of the presidents in recent history, his lifes journey epitomizes what staying in school and studying hard can achieve. As an African American, raised with one mother and caring grandparents, not born into wealth and privilege, he’s achieved amazing things against massive strange. Obama’s message to students on the importance of education. Photo Credit: newser.com

Isn’t he an excellent example for students?

Also, can’t his address function as an excellent lesson in civic instruction whether you like him, or agree with his policies or not?

Why aren’t American kids leading the planet in educational accomplishment and performance? Data reveal our schools, as a whole, aren’t the pinnacle of superiority. Obviously, there are some, but it isn’t the average. Many countries as well as their students are outperforming us on many fronts.

A current report commissioned by the Schott Foundation For Public Education, Lost Chance: A 50 State study, is chilling and demonstrates just how far we must go to achieve great educational results.

Other references which evaluate the state of schooling of America’s children include: the National Center for Education Statistics as well as the Alliance for Excellent Education.

The president’s message that high educational accomplishment on an individual level as well as for the well-being of the United States is a much wanted one. It should be his mantra for as long as he inhabits the Oval office based upon where we are as a country, and where we should really go.

So, why the vitriolic opposition to such a needed message?

America, we must do some soul searching about this one. Veiled racism is alive and well also it continues to cripple much needed progress in the most vital areas.

Lets expect that now that all of the fury has passed, every parent and teacher will play and talk about the president’s message to the countries kids. It includes lifelong lessons.

What could possibly be more significant than doing everything we are able to in order to inspire our kids to be the greatest that they can in school for his or her own future well being and that of our countries?