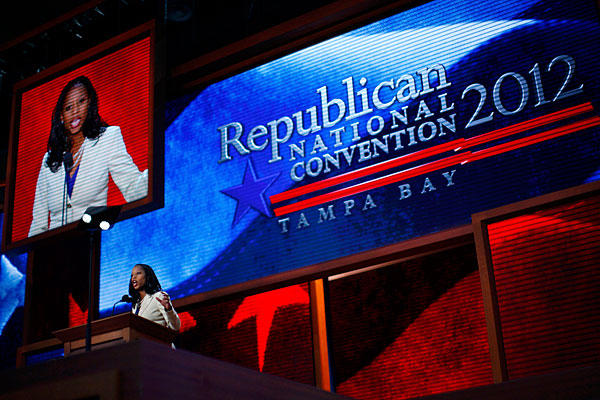 Republican window dressing is in full regalia when it comes to creating an image about the nature and level minority, particularly that of blacks and Hispanics, participation in party. During the 2012 Republican Convention, diversity window dressing and collective amnesia about the systemic racial discrimination in this country was on display

Throughout the convention, the stage was crossed by a parade of new minority faces. There was Mia Love, a black, Mormon mayor of a small town in Utah who is currently running for Congress. Are we to believe that she is just one of many black Republicans, of many Mormons that are black? Or many such combinations thereof? Barely!

Then was Artur Davis, a former black Democratic Congressman from Alabama lately turned Republican. The parade of diversity did not stop there. Nikki Haley, the first Indian-American female governor of South Carolina addressed the convention, along with Susana Martinez, the first female Latino governor of New Mexico. And, naturally, there were others peppered.

They came to tell their story of personal success despite their source, their race, their challenges. They came to tout how they’re living examples of the American dream of equal opportunity for all.

However, when you move out into the countryside, how many minorities do you actually see step into the halls of the Republican convention? When you examine the policies, the practices, actions and the words of leaders, Republican elected officials, pundits, and talking heads, do you consider they’re a party of equality, inclusiveness, and respect across race, ethnicity, and socio economic standing?

If you had no knowledge of America for the first time’s history, or were merely seeing it, one might readily buy into the Republican mantra of everyone is free to become whatever they want to become, whatever they work hard at becoming. That we all, actually, have the same amazing American chance in regards to getting a high quality education, in regards to getting a job that pays a decent wage, in regards to having the capacity to reside in a great neighborhood free of blight and crime.

If you were uninformed and walked around with blinders, “Republican Speak” would seem quite appealing and make all the sense in the world.

But where have all of those Republicans been? What America did they grow-up in? Do they have a hint about the destruction the institution of slavery waged on the black family unit? Do they have a clue about the century of racial inequality and discrimination in regards to instruction, occupations, housing — the critical components but ultimately a nation’s health?

Are they confused or unaware of the twelve million undocumented immigrants that work for less than minimum wage, undergirding the American economy? Yet because the Republican Congress refuses to act on any policy which will bring some kind of alternative to empower them to become productive American citizens they live and hide every single day under the cloak of panic. Presidential candidate, Mitt Romney’s solution is that they — all twelve million of them — should self deport. Truly, where’s the Grand Ole Party, the party of Lincoln, the party of the post-Reconstruction era? Once, there was a Republican Party that sought to live out the creed of this country’s most sacred files. The Declaration of Independence, the Bill of Rights, and The Constitution’s true significance appeared to have guided activities and their policies to make this a better America for all.

Fast forward to the 21st Century, and one has to inquire; on what American creed do they base their worldview, philosophy, policies, and practices? Unlike our forefathers, the realities of the day appear to have little power in the options put forward.

Any actually informed American, who’s honest, can explore the mirror, and talk the truth, knows that those minorities who paraded across the stage at the Republican Convention represent the exception not the rule, in not only the Republican Party, but all across this land. They’re not examples of the life experiences of most minorities in this nation.

That’s the real danger that threatens America’s long-term and short-term health more than any other outside force. We’re failing to live out the very principles that can support us, and continue to make us amazing, as a state.

Window dressing and collective amnesia are not for sustaining a society regardless how wonderful it has become a winning formula. Let Rome be our lesson.