What Is Your Dream 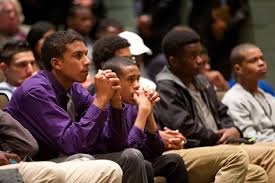 Saving black and Hispanic boys should become high priority for school districts across America. They continually to be underachievers and at risk to become dropouts and enter the penal system.

Blacks and Hispanics, especially boys in the two largest minority groups, are in need of special attention when it comes to closing the achievement gap in education, and to avoid what has come to be a perpetual cycle of a life of poverty, crime and hopelessness.

As America becomes a nation of minorities, what does such persistent underachievement portends for the future? No country can afford to have millions and millions of its citizens relegated to a perpetual underclass and expect to be economically, socially or politically strong. It is undermined, and its future compromised at home and on the world stage. Saving black and Hispanic boys must become a priority.

Is this where America, currently still the strongest democracy, headed? Few would argue that our position in the world is changing for any number of reasons, and the weaknesses in our education system when it comes to minorities being treated equally are among them.

We can no longer “talk the talk” and not “walk the walk” when it comes to taking real and meaningful, broad and sustained measures to help blacks and Hispanics learn and perform when it comes to educational achievement at  levels required to have a quality life and be productive citizens in communities across America.

But some communities are taking steps to address the educational needs of those minority populations that have been continually and consistently discriminated against when it comes to having access to a quality education. Recent data collected from school districts across America show that black and Hispanic boys are disciplined and expelled from schools at a disproportionate rate for the same offenses than white boys. Data from the criminal justice system also show that more black boys end up in the prison system for committing the same crimes, whether misdemeanors of felonies, at a much higher rate than whites. This has been the practice for years, for generations. What else do we need to do to increase the efforts of saving black and Hispanic boys?

The mayor and schools chancellor in announcing the special program for saving black and Hispanic boys said the funds will be dedicated to building a new all-male high school, recruiting mentors for students, and providing grants to individual schools to address persistent achievement gaps in District schools between white students and their minority peers. Black and Latino boys make up 43 percent of enrollment in city schools.

Elected and school officials in the District of Columbia, as in some other places, recognize that s addressing the achievement gap is the greatest need in many school systems. It is a common occurrence that nearly half of black and Hispanic boys are reading below grade level by fourth grade, and this learning deficit follows them and impedes their learning throughout grade school and high school. As a result, many become drop outs, or they graduate with a substandard education, prepared to hold only minimum wage jobs.

In 2015, this grave disparity of educational achievement of the two largest minority groups is among America’s greatest failures as a nation. Saving black and Hispanic boys must be tackled in a bold and broad way if we are to remain strong and vibrant.