The Seattle Seahawks and the New England Patriots. Seahawks and Patriots mascots for the Super Bowl XLIX contenders will at least alleviate one blemish. Chances are, had the Washington Redskins made it to the Super Bowl, the controversy about their mascot and nickname would once again have prime time attention.

Instead, we have “Deflategate” swirling around the Patriots. Cheating Patriots? Does cheating fit our American understanding of what it means to be a patriot? Oh, another subject for another time.

How long will it take to admit and correct the injury and insult that is piled on by the continued use of Native American nicknames and mascots by high school, college and professional sports? Why not more nicknames like the Seahawks and Patriot mascots. And let us not blame the problem or solution about what a team calls itself totally on location.

There has been and continues to be efforts at different levels, including in the United States Senate to change professional football names as the Washington Redskins. The Seahawks and Patriots mascots are great examples to follow. 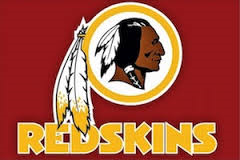 Haven’t we as a nation done enough to Native Americans? First, we came to this country pilfered, pillaged their villages, women and children. We ultimately took the land and herded them off to reservations. They continue to be subjected to sub-standard education and poor health care.

As if this wanton and utterly disenfranchisement was not enough, we have continued to reduce their culture for our entertainment by using Native American nicknames and mascots – from the genre of western film (The Lone Ranger and beyond) to our national pastime of sports, baseball and football most notably. Worse, we pass this on to our children.

The cry of “enough” has grown louder. The Smithsonian Museum of Native American History held a day-long symposium about whether the pro football team, the Washington Redskins, should consider changing their name and mascots. The mayor of Washington, D.C., sensitive to the issue has begun to use the “Washington Football Team” instead of the Washington Redskins. Why not adopt a new name like the Seahawks and Patriots mascots/

During that day-long symposium, many attendants became sensitized to what Native Americans must feel when they see fans dressed as Indians and performing moves and dances that they haven’t a clue of their sacred meaning. There were many converts during that symposium, many vowing never to wear war paint, don an Indian feathered headdress and mockingly perform an Indian dance, “the Tomahawk Chop,” again.

Such use of Native American nicknames and mascots show racial and ethnic insensitivity and ignorance of history. 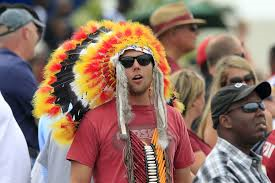 Seahawks and Patriots mascots are great compared to the Redskins. Photo Credit: gamedayr.png

The Michigan Department of Civil Rights filed a complaint with the U.S. Department of Education, requesting that all Michigan high schools be barred from using Indian nicknames and imagery as their school mascots.

An editorial appearing in a Michigan paper, The Holland Sentinel, says it well: “…White Americans who blithely adopt for their own entertainment images from a minority group, especially one as persecuted through history as Native Americans, are likely to offend that group. The portrayals are almost inevitably one-dimensional caricatures, perpetuating old stereotypes. Too many people who would never dream of wearing blackface or a serape and sombrero abandon their good judgment when it comes to Native Americans, reducing an entire culture to war paint and feathered headdresses. If you wouldn’t flaunt these images on a reservation, then they’re not appropriate in a Michigan high school either.”

As a nation, a day-long symposium or a filed complaint, and other actions here and there are starts to take corrective actions. But, they clearly are not enough.

The pervasive, persistent and insensitive use of Native American Nicknames and Mascots in our most endeared sports at every level only reinforces the need for a public dialogue in communities across America.

Not to have these honest dialogues is to continue to perpetuate our attitudes toward race and ethnicity in this country, which we all can acknowledge are still in need of major, major, major adjustments.

While the Native American nickname and mascot issue is not front and center during this Super Bowl, the greatest sporting event in the nation (“Deflategate plagues the Patriots), it will be again when the new football season begins.