On This Fourth Of July 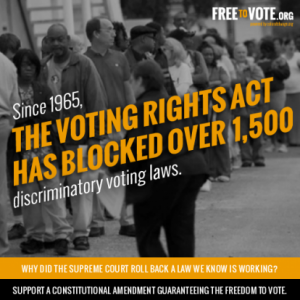 The Supreme Court ruling on voting rights, specifically to eliminate the protections that allow millions of minorities to vote and particularly in those states that have a history of denying or making it hard for blacks to vote, should be a wake-up call.

What a drawback on the long road to attaining equals rights, for blacks particularly. Undoubtedly, the opinion will even impact Hispanics and other minorities as states like Mississippi, Texas, North Carolina and others hurry to implement arduous and suppressive requirements for citizens. The Supreme Court ruling on voting rights has potentially detrimental impact.

The Supreme Court on voting rights decided to overrule a law that shielded minorities’ right to vote during the very year minorities and partners are commemorating the 50th anniversary of the March to Freedom. During this month, Medgar Evers, along with many others, is being remembered for his gallant and courageous work in Mississippi to register blacks to vote. Evers lost his life doing so, gunned down in his drive way upon returning from an NAACP assembly.

Fifty years ago, during 1963, Civil Rights activists were threatened, beaten, and killed attempting to procure the right for blacks to visit the polls and cast a vote in the bastion of racism and oppression, where hate crimes were worn like a badge of honor. The very states that were the focus of the March for Freedom – Mississippi, Alabama, Arkansas and others – must be feeling the Supreme Court has just handed them a new lease on life. They can return to their old ways of doing business. While the packaging may differ, the product will be the same: fewer votes.

This latest ruling is a wake-up call as the right to vote continues to be at risk in communities across the nation and many states. There really isn’t much time for commemoration and celebration of what took place 50 years ago when the same danger looms large with the Supreme Court’s opinion to gut the protections. Supreme Court on voting rights is alarming.

There must be a gigantic campaign on two fronts: one, to get Congress to pass new laws with the proper protections so that all American citizens can exercise their right to vote without undue hardship; and two, there must be a sustained attempt to prepare all eligible minority citizens about the looming threat that could deny them their right to vote as early as the 2014 elections. In many states, they may find themselves unable to cast a vote.

What does this say about the democracy that boasts of being the most grand on earth?