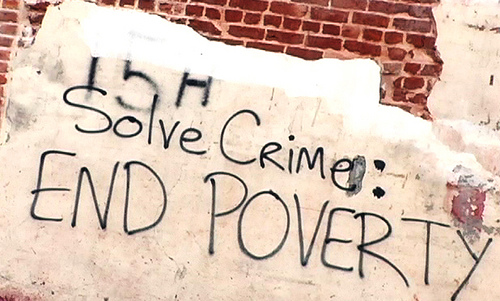 Breaking cycles of poverty and crime that viciously and negatively impact the lives of black men, women and children all across America should become a national priority. Many black men seem to be caught in a vicious cycle of poverty and crime, and there appears to be little progress of making meaningful strides in breaking the cycle. Where are the honest and sustained efforts to bring about remedy for what seems to be endemic social and economic disenfranchisement?

Recently the Equal Employment Opportunity Commission filed suits against discount retailer Dollar General Corp. and a BMW manufacturing plant in South Carolina for their use of criminal background checks to screen out job applicants or fire workers.

While it appears that they were well within their rights to do so, it surely raises a more long- term question of how many blacks, especially black males, will ever be able to escape a life of poverty, which often includes a revolving door of offenses.

Breaking cycles of poverty and crime should be a national priority. Photo Credit: poverties.org

Based on a recent post in the Associated Press, BMW, in using criminal history checks, fired some of whom had worked with the company for at least a decade and a number of workers largely black. The nature, gravitation or age of the criminal violation was disregarded in the conclusions. Relevancy of the violation to the sort of work performed also did not matter.

As for Dollar General, one worker had been offered a job, and despite divulging that she had been detained for having a controlled substance 6 years prior, the job offer was later revoked when it was “found” that Dollar General’s policy was not to hire anyone with such a conviction within the last 10 years. In another case, an employee was fired even though she managed to show that an alleged felony conviction was a mistake made by the system.

The lawsuit filings are a result of both companies ignoring the revised guidelines issued by the EEOC, which warn employers against the use of exceedingly broad criminal checks that could limit job opportunities for individuals with previous convictions. The goal of the new guidelines would be to reduce impediments to employment for people with previous criminal records, who’ve paid their dues and are now leading lives that are responsible.

What’s even better is that gainful employment can begin to break the cycle of poverty and the pattern of crime that often goes along with it.

Both suits are the first since EEOC issued the new guidelines last year. The suits were filed when all efforts to accomplish an arrangement involving reinstatement and restitution failed.

The issue is certainly not an easy one. The new guidelines are encouraging employers to give job applicants who may have had brushes with the law an opportunity to explain any past criminal misconduct before they are fired arbitrarily after years of a good work history or are rejected as applicants.

Employers see this as a way to keep questionable or undesirable workers out of their work force.

If you think about the disproportionate number of young black men who are born in poverty, who grow up surrounded by crime and almost no identical accessibility to a quality education or other chances, and who get caught up in the criminal justice system frequently for wrong or unfair convictions, how will their predicament ever improve?

If employers continue to close the doors or blow off great working workers at will, how will this vicious cycle of offense and poverty ever be broken?

It’ll take General Dollar, BMW and many other companies across America to rethink their hiring and firing practices.