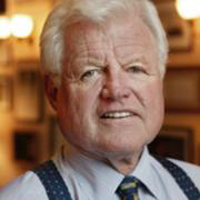 Ted Kennedy champion for good epitomized Aristotle’s “Man of Practical Wisdom” when it came to carrying out Plato’s vision of what government ought to be about, “seeking the greatest good for the greatest number.”

That was Ted Kennedy’s public life. We mourn the passing of the brave and compassionate champion. Despite the passage of important pieces of legislation, they merely represent some of Kennedy’s life’s work.

Had Senator Kennedy been able to endure, there’s no doubt he could have worked until we reached significant health care reform and immigration reform, a couple of the main, far reaching and controversial problems confronting the country now.

How do we best honor this kind of public servant’s work and heritage? As Vice President Joe Biden expressed in his noted,  like Senator Kennedy, we have to never become skeptical about what we as Americans can achieve if we work hard and unselfishly to reach it.

Oh if present and future leaders may be so inspired by Ted Kennedy the public servant, America could surpass any greatness already reached.

Senator Kennedy spent his life working for and passing public policies that helped his fellow citizens an achievement that surpassed that of any other Senator in U.S. history and more than most presidents of the United States.

His fire and empathy, power and art, prudence and patience were used in great measure as he fought to ensure equality for all irrespective of an individual ‘s race, ethnic heritage and socio-economic class, which led to the passage of the 1964 Civil Rights Act. His work didn’t cease there. Senator Ted worked to pass the Voting Rights Act and Immigration Act in 1965, the Refugee Act in 1980 and many more.

Throughout his career of public service, he fought for other critical far reaching problems, among them educational equality, not to mention his lifelong fight for health care reform.

Many organizations whose work has been for the disenfranchised, the poor and frequently forgotten understand in a poignant way they lost a champion. It had been expressed in statements  by organizations such as the National Urban League, the Leadership Conference on Civil Rights, the Asian American Justice Center and America’s Voice.

Karen K. Narasaki, president and executive director of the Asian American Justice Center, maybe said it best in a statement she issued on the passing of Sen. Kennedy:

“Sen. Kennedy was the Senate’s amazing advocate for equality. Sen. Kennedy believed in, and fought doggedly to shield, the civil rights of Americans. The immigrant community is particularly thankful for his years of service and dedication, and for being one if its staunchest supporters.

Asian Americans specifically honor him because of his work in 1965 when he directed, and won, the conflict to pass that year’s Immigration Act, which lifted the 1924 racial limitations on immigration from Asia and abolished immigration quotas. Asian Americans in directed the fight for the Refugee Act of 1980, which ensured humanitarian protections for refugees in foreign camps or seeking asylum. The Asian American community wouldn’t be as big or as varied as it’s now without his championing of immigrants and refugees.

In the seminal Civil Rights Act of 1964 that assaulted segregation, to the Voting Rights Act of 1965 that sought to remove minority discrimination in voting, to the 1968 Fair Housing and Bilingual Education acts, Kennedy was an essential figure in ensuring that minorities actually be treated as full citizens.

More lately, he was the main patron of the Civil Rights Act of 1991 and was essential to the 2006 reauthorization of the Voting Rights Act. Even while the Voting was battling brain cancer, he never quit fighting for others. Earlier this season, Kennedy was crucial to passage of the Lilly Ledbetter Fair Pay Act, which re-established the right of workers to challenge wage discrimination and which was the very first law President Obama signed. Sen. Kennedy was at the center of attempting to get long sought hate crimes laws and immigration reform enacted. Lastly, we’re saddened by his absence in the health care reform discussion, a cause he took up early in his career and not lost.

As Senator Kennedy once said, “there’s no safety in hiding.” I might add, ” and doing nothing.”