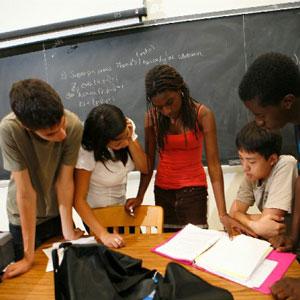 Unequal education for blacks and Hispanics student still persist at every grade level in American schools. It has been a long-standing problem for blacks, stemming from the institution of slavery. With Hispanics becoming the nation’s largest minority, it seems that unequal educational opportunity will be a challenge for them as well.

The new national K-12 Data Collection report conducted by the U.S. Department of Education’s civil rights office paints a depressing and disturbing image of how black and Hispanic pupils are treated in the country’s schools — regrettably, the majority of the nation’s schools. The data, gathered from more than 72,000 schools represents 85 percent of all students.

It demonstrates that poor blacks are on the losing end as it pertains to being disciplined for the same offenses, but they’re also on the losing end when it comes to class offerings, resources, and thus overall academic achievement.

The consistency and speed at which blacks are suspended and expelled from school is substantially greater than that of whites and other minorities. That within itself is a horrible injustice to children who often come from oppressive and disadvantaged houses and neighborhoods, only to get to school and find more from those who should be trying to improve their predicament. These pupils also appear to be put on a track of underachievement. In addition to lacking quality, experienced, and well-paid teachers, these pupils are in classrooms where technology, the informative materials, tools, and other resources are outdated, inadequate, and insufficient. The report highlights that a high percentage of teachers in schools with the greatest black and Hispanic registration had instruction of two years or less. Those teachers will also be paid significantly less than their counterparts in other schools.

But the atrocity does not stop there. It seems that blacks and Hispanics are doomed to a life and career of being in a permanent underclass. The report found that thousands of high schools with black and Hispanic pupils do not offer algebra II, often a prerequisite for getting into college and also some trade schools.

Patte Barth, manager of the National School Boards Association’s Center for Public Education, puts it clearly, “If you do go to [college], you are probably going to end up in remediation. Without algebra II, you don’t become an auto mechanic. Without it, you don’t get into one of the growing service jobs in fields like communications.”

What has actually been attained since the historic court case of Brown vs. The Board of Education, which supposedly was the end of discrimination in instruction decades ago? How is it, that our children in the 21st Century are still facing some of its greatest social challenges and we are still tolerant, still willing to turn a blind eye toward an educational system that will not create equal opportunities?

How can we expect to break the cycle of poverty and underachievement, crime-ridden areas, un and underemployment, hopelessness, and resignation of second, third, fourth generations right within America, if we continue to permit an educational caste system to endure?

History teaches societies many lessons. Among them, there’s no permanent underclass. And any society that seeks to ignore that it exists, or perpetuate oppression and human servitude, is ignoring a slow growing cancer that may ultimately be its death.

Separate but equal schooling was deemed unacceptable and outlawed long ago. Together but unequal instruction is just as insidious and detrimental.

Where’s the indignation among teachers, lawmakers, parents, and all caring adults?