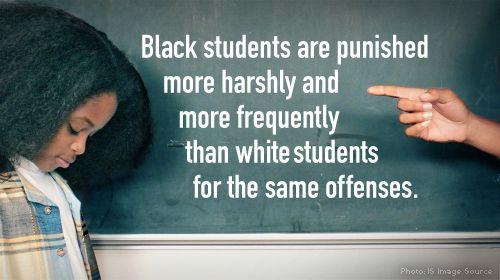 Black students are suspended more than white students in grade schools and high schools across the United States. The U.S. Department of Education released a very disturbing report this week emphasizing the disproportionately high rate of black pupils suspended from schools in comparison to white students. Black pupils are three times more likely to be suspended for days whether they come from poor, middle class, or rich families.

The glaring disparities were found to be consistent across the data accumulated from 72,000 schools in the state. When the study was released, Secretary of Education, Arne Duncan, said, the sad truth is that minority pupils across America face considerably severer discipline than non-minorities, even within the same school.

The real question is: Why? Why and what exactly are the reasons for the high rates of punishments for black students, most of which are black boys, for what many consider minor disciplinary issues including use of profanity or dress code infractions? Black students suspended more than whites is a glaring inequity.

The reply to that question is a complicated and multi-faceted one. The report also easily recognized the tendency included the least experienced, least prepared, and lowest paid teachers taught in those schools, while it admitted that many have high populations of poor black kids from single parent homes.

But the study reported other findings in the data which can be just as, perhaps more, dismaying. The study show that there isn’t any body of evidence that black children show higher rates of poor behavior than whites. Russ Skiba, an educational psychologist, says what this shows is that teachers, the majority of whom are white, are applying prejudices that are concealed as disciplinary actions are being issues to black children.

Skiba noted, We’ve had teachers tell us that there are different forms of defiance, and they’re bothered by black defiance. Skiba’s views were further supported by findings in a similar study about higher punishment rates of blacks in schools in Washington, D. C.  Robert Pierre noted in an article covering the report, the more disturbing reason is one that many well-meaning folks are loathe to declare: We view them differently. Adults attach to children their perspectives of black men, even when those children are not too old to realize that they are anything other than kids. There is  a body of research that certainly confirms a causal connection between race and punishment meted out in schools. There are numerous cases where black kids are punished more often and more harshly for exactly the same infractions. Additionally, there is a body of evidence that shows that higher suspension rates are linked to higher incarceration rates for black teenagers, which escalates as they become black men.

These studies offer evidence that we do not live in a post-racial society. That there are prejudicial and stereotypical views that still influence our activities toward someone who is not white versus white when all the aspects of the scenario are deemed equivalent.

Moreover, we need to comprehend how such actions and those prejudicial views have both detrimentally short and long term effects. They can incorrectly and, commonly, unduly sentence kids to a life of underachievement, a refusal of the real opportunity to pursue the American promise of an equivalent education, and a chance for an excellent life.

If this study does nothing more, hopefully, schools administrators and teachers will reconsider the kind of punishment they give to pupils of different races, and be sure that the punishment is suitable for the offense, and that the offense is judged, rather than the color of the kid.

Imagine the number of young black pupils, especially black boys, that have been negatively impacted by the harsh punishment they received for exactly the same violation by a white student who received a lesser punishment.

But the good news is that there is also a body of evidence that demonstrates that schools that issue fewer suspensions have higher achievement scores for all students black and white.