The 2013 March on Washington is a wake-up call that equality for all Americans, particularly black Americans doesn’t exist after 150 years.

President Barack Obama and tens of thousands of Americans will commemorate the March on Washington which occurred in 1963, some 100 years after the Emancipation Proclamation that was designed to restore equal rights to black people and to end slavery in the United States.

The march in 1963 revealed how many Americans believed and embraced one of the fundamental tenets of this great democracy that all men are created equal and endowed with the inalienable rights of life, liberty and the pursuit of happiness.

On Aug. 28, 1963, men and women, blacks and whites, Latinos and native peoples, Jews and Christians – more than 250,000 in all – came to the Lincoln Memorial to express their frustration that after more than 100 years, black people and the poor were still quite oppressed and disenfranchised when it came to job opportunities, equal pay, equal education, even identical accessibility to restaurants, hotels, toilets and water fountains. So they came to the country’s capital in a historical display of power.

Fast forward to 2013 and where are we? Marchers are gathering once again, after another 50 years have passed, to not only remember the March on Washington in 1963 where Martin Luther King, Jr. delivered the seminal “I Have a Dream Speech”, but they are assembling there to remind all of America that the work to attain racial equality is far from done.

Indeed, the realization that people “won’t be judged by the color of their skin, but by the content of their character” still evades us when we have a look at the growing proliferation of racial profiling when it comes to black and Hispanic Americans. 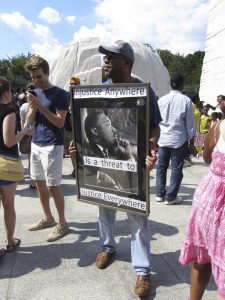 The civil rights that blacks fought for and won during the 1960s have reaped gains for Latinos, women and other minorities, the handicapped, gays and lesbians and others who may have been typically discriminated against.

While many people would recognize that progress was made in many emblematic manners – with the election of blacks at every level of government, including the highest office in the land – most black Americans still experience high degrees of discrimination in most every facet of American life, in regards to jobs, quality education, housing, equal justice under the law, and even the Right to Vote.

But in recent years, there seems to be a steady erosion of the increases. This is clear with the increased episodes of racism from street corners to college campuses, from racist graffiti to hate crimes that resulted in the loss of innocent lives just on account of the color of their skin.

The recent Supreme Court opinions that threaten affirmative action measures that will protect equal access to higher education and Voting Rights should be cause for major concern.

The 2013 March on Washington is a wake-up call that equality for all Americans, particularly black Americans, still does not exist even after 150 years.