Stop and Frisk laws based on racial stereotypes are being challenged because they disproportionately target Hispanics and blacks who most frequently aren’t guilty of committing any crime.

Based on recent facts about stops by the New York Police Department, about 5 million individuals have been stopped, questioned or patted down. More than 87% were Hispanic or black. But only about 10% of stops resulted in an arrest or summons. And there were fewer episodes where authorities really found any weapons.

Even though it’s been ruled by a judge that the policy consists of racial discrimination, Mayor Bloomberg, and Police Commissioner Raymond Kelly are defending the usage of stop and frisk and are vowing to appeal the ruling. The judge vehemently maintain that violent crimes will grow if the City if forced to stop the practice.

Trayvon Martin’s mother is speaking out against stop-and-frisk laws and the police practice in New York and other cities, saying police nor civilians have the right to halt someone due to their race. “You can’t give people the authority, whether civilian or police officers the right to just stop somebody because of the color of their skin,” Martin’s mom, Sybrina Fulton said on NBC’s Meet the Press. 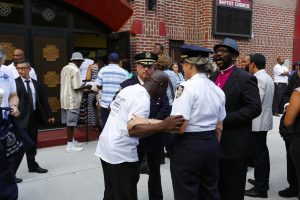 In an appearance on CBS’s Face the Nation, Commissioner Kelly claimed, “The losers in this, if this case is allowed to stand, are people who live in minority communities.”

The “Stop and Frisk” laws can really be viewed as another facet of a Justice System that continues to discriminate against minorities, particularly blacks in regards to stops, arrest and convictions. Regrettably, many young black men and black adolescents are subjected to profiles and stereotypes that don’t apply to them merely because of their specific appearance or deemed to be in a store or neighborhood where they aren’t welcomed.

This year marks the 50th anniversary of the fight for many rights for blacks, from the right to vote to the right to have equivalent accessibility to jobs, schooling, and equal justice under the law. From being stopped simply based on suspicion, to being detained more often than whites for the same infractions, to being sentenced to longer jail or prison terms than whites for precisely the same verdict, there is a lot to be done to correct the new Jim Crow in all of its forms.