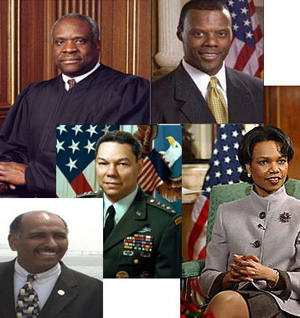 Republican Party and African Americans, is there any common ground remaining between them? Or has the Republican Party, the party of Lincoln that once fought against slavery and welcomed Negroes in the political process, now in the 21st century given up on trying to bring more African-Americans into the party?

As many party leaders and members of Congress make efforts to become more inclusive following the barbarous loss and damage inflicted during the last Presidential election, the absence of any reference of trying to broaden the tent to include African Americans is striking.

You frequently hear Republican governors, Congressmen and talking heads exclaiming the demand to reach out to Hispanics, Asian Americans, Latinos, those of every ethnic group, but not African Americans.  In all of the addresses and conversations, the words blacks or African Americans are absent.

Why is that? Have they accepted or purchased into the belief that they need not bother to appeal to blacks because the Democratic party has them “signed, sealed and delivered” for every election from now to evermore?

You know what they say about presuming and assuming….

What has happened to Lincoln’s party who fought alongside the abolitionists to stop slavery? It was the party that elected more African Americans in state houses and the U.S. Congress during the Reconstruction Era. And in recent history, it has been the party that selected General Colin Powell, Dr. Condoleezza Rice as Secretary of State, that elected African-American Representatives from Oklahoma, Florida and Utah, and who even supported Herman Cain, an African American during the Presidential Primary.

Why the silence about recruiting and adopting even more African Americans as the Republican Party seeks to restore its value and practicality as a competitive political party that can have a real impact on policy and leadership as we continue to work to make America the greatest nation it can be? Has the Republican Party become invaded by too many racists and right wing conservatives who long for a bygone America of servitude and white supremacy of the poor and minorities, that they are willing to risk losing relevancy to a shifting America?

The Republican Party may not have noticed, but not all blacks are liberal, nor do all blacks belong to, or have an association with, a political party. Do they still fail to understand that not all blacks live on Medicaid or expect “presents” from the government as Mitt Rooney so ignorantly proclaimed.
To all Republican Party leaders and elected officials: Why isn’t an appeal to blacks contained in your current attempts to restore and re-define the assignment, political doctrine, and policies of the party? Do you not believe you just might be missing a meaningful chance?