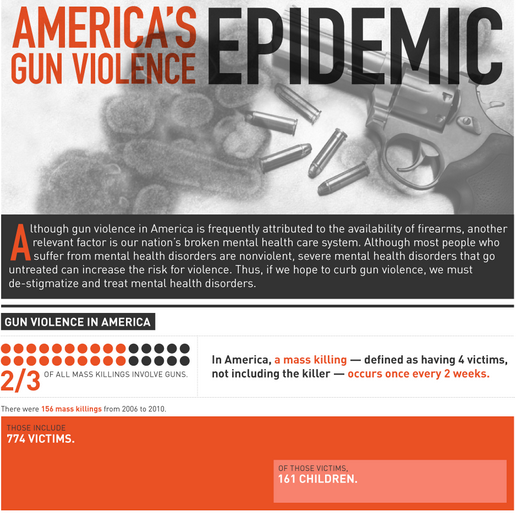 Incidents of gun violence are symptomatic of really deep and complex social issues here in America, and restrictive gun legislation’s passage will just function as a band aid if the root causes of those difficulties aren’t addressed.

There are numerous sorts of firearm violence in this nation with many different kinds of victims and perpetrators. Easy access to guns by the sane and crazy, young and old, by criminals and upstanding citizens alike is probably the most simplistic facet of the issue. Gun violence is symptomatic of greater problems in communities.

It’s relatively easy to comprehend and recognize, albeit tragic, an episode of gun violence when a crazed gunman with a history of mental illness goes on a shooting rampage, killing whatever innocent casualties could be in his paths. These multiple, senseless deaths, occur in the most unsuspecting and unexpected places and send shock waves through us all. Additionally they capture the attention of the media and elected officials for days on end.

But what about the day-to-day gun violence perpetrated in urban areas, where kids are deliberately killing other children and grownups equally, where the unemployed have resigned themselves to a life of crime and firearm violence because they are not able to see any other solution?

How can we start to tackle these decades-old acts of gun violence? Passing stricter firearm legislation is tantamount to prescribing maximum strength aspirin to heal a sort of cancer. To stem the most frequent and most prevalent occurrences of firearm violence, which occur on the roads in urban America on a daily basis, there must be sustained and comprehensive solutions. There must be real attempts to address the cycle of poverty, continual and high unemployment, poor housing and blighted areas, and substandard schools that continue to pass generation after generation with skills that don’t begin to prepare them to get a job that would make an adequate wage. Doing something about these conditions with exactly the same resolve must become the priority. Gun violence is symptomatic.

While those in opposition of more gun control and proponents continue to battle it out, much of their fervor and fierce defense are misplaced. They should focus on the root causes of gun violence which lies with the mentally unsound and ensuring access to needed mental health care for the crazed if they wish to really reduce it. But that will only help address the high profile incidents of mass violence. What about those that happen on a daily basis by the rational and sober?

It’ll take considerably more than passing stricter legislation to address the dilemmas of most of the firearm violence in this state that happen on a daily basis, where most lives are lost. It is going to demand reducing the root causes of joblessness, poverty, poor housing, poor educational training, and wild hopelessness where resorting to a life of violence and crime is apparently the only alternative.

We’ll find ourselves filled with angst, wringing our hands, and jousting needlessly again, and again, if we don’t.

When will we say, enough is enough?