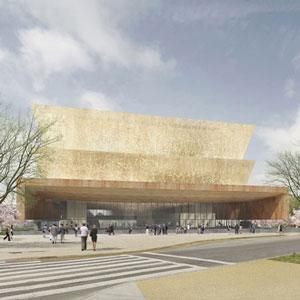 Progress takes time, sometimes an inordinate amount of time, to simply first make a wrong, right. But it is a necessary step to move forward. Perhaps, that is a good way to put into perspective the announcement today by the Smithsonian Institution that it will build a National Museum of African American History and Culture (NMAAHC).

The Museum, scheduled to open in 2015, will be located on the National Mall between the Washington Monument and the National Museum of American History. How fitting. The location is symbolic of the nation’s attempt to include and remember the contributions and the critically important role a people played in its history in making it the nation it has come to be — a people that up until recent history, it fought so vehemently to marginalize and exclude.

While construction of the museum, within itself, will not be the great salvo that will correct all past wrongs and launch us forward to get it right as we continue to realize the potential of this nation, but most assuredly, it will stand as a firm marker of validation that the contributions of African Americans are finally acknowledged and recognized. An African American National Museum is long past due. The Museum can potentially do so much more for the generations of this present age and for so many generations to come.

It will be the only national museum exclusively dedicated to the documentation and preservation of African American life, art, history, and culture. Being so, it will provide an excellent and ongoing opportunity to explore and learn about a huge segment of American history that has been minimized, distorted, or omitted, in school books, class rooms, and official annals or record. The museum will be a great step in setting it straight.

The museum will serve to bridge many racial divides as visitors learn of the many untold stories that show our common values, our common struggles, our common needs, wants, strengths, and weaknesses. Through the pain, suffering, and triumph of the African American experience, we might finally have an opportunity to emerge simply as Americans with a common and intertwined history — good and bad.

Hopefully, the museum will foretell of a future where we can have local and national dialogues that will promote understanding and healing. That we will begin to focus on the conditions and challenges we face as one humanity, standing on the shoulders of all of our forefathers, and building on the contributions of all of those who have gone before us to make the our communities, and our world better.

Maybe the National Museum of African American History and Culture will be the lasting monument that will finally never let us ever marginalize, omit, or distort the role played by any of our fellow citizens in making America what it is.

More importantly, it portends and bodes well that finally we will embrace all who will play a role in America’s history for centuries to come.

Edited and Reprinted with Permission of  USAonRace.com