Children Are Caught In Immigration Quagmire

Outcomes of 2020 Elections Will Be Critical

Children Are Caught In Immigration Quagmire

In the detention centers within the United States, innocent children are caught in immigration quagmire and suffering in ways that could have lasting impact on their lives. Did you ever think that babies, toddlers and small children would be living in squalor because of US policies, or the lack thereof?

Sadly, it has come to this because for years, Congress has failed to pass comprehensive policies to handle an immigration problem that has been growing for decades. Why? There are many reasons, with partisan politics being a major one. It seems that Democrats and Republicans refuse to work together on anything that is in the best interest of the country.

But the President and Congress not doing their job is not the only reason. The big elephant that has long been standing in the room is cheap labor. Many businesses, large and small, have taken advantage of cheap migrant labor for decades, and they continue to do so.

Businesses have hired undocumented workers not only because they pay them less wages, but these businesses also do not have to pay taxes, or make a contribution to Social Security, Medicare or provide health insurance for hundreds or thousands of their employees.

Imagine what these immigrants are adding to the bottom line. In the meantime, the country’s treasury is cheated, the job market is impacted and additional stress is put on governmental services. Illegal immigration is not the new issue that the current administration has made it out to be. Yet, innocent children are caught in immigration quagmire. 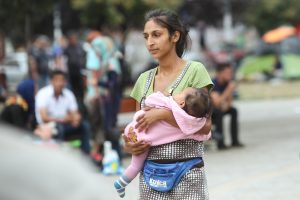 What is happening at the border is new. Separating babies from their mothers is bad enough. Putting them in situations where they are being neglected and allowed to live in unhealthy and harmful conditions is inexcusable.

Illegal immigration has and continues to challenge the country borders. The revelation of hundreds of innocent children are caught in immigration quagmire caused by elected officials not doing their jobs takes the issue to another level.

One would think that seeing babies lying in filth would move the President and Congress to readily act. But, will it?

Innocent children are caught in immigration quagmire that is putting their lives at risk, and could cause lasting detrimental effects on their development. It is shameful, inhumane, and un-American.

Where is the collective outrage?