DACA Exposes the Hypocrisy of the Immigration Issue

The Trump administration announced that it is rescinding the Deferred Action for Childhood Arrivals (DACA) executive action that the Obama administration put in place in 2012. Rescinding DACA exposes the hypocrisy of the illegal immigration issue. The purpose of the the executive action by the Obama administration was for the children of illegal immigrants who entered the country involuntarily as minors to receive a deferment from deportation, and be eligible for a work permit.

Rescinding DACA exposes the hypocrisy of the illegal immigration—an issue that United States Congress has failed or refused to deal with for decades. So what does the rescinding DACA actually solve? The real issue is this country needs Immigration Reform Legislation.

On the cynical side, it is another Obama action that the Republicans seem hell bent on undoing. Also, it is Trump’s way of pandering to the extremist wing of his base of supporters since he loudly and consistently promised that he would end DACA while on the campaign trail.

But how can targeting 800,000 young illegal immigrants—who came to the United States involuntarily, who are law-abiding, and hard-working—begin to solve the issue of what needs to be done with the twelve million immigrants that continue to live and work within our borders?

What is the point of threatening and creating anxiety and uncertainly among the small percentage of illegal immigrants who came forth and provided our government with all of their personal identification, trusting that they had the opportunity to ultimately become American citizens? 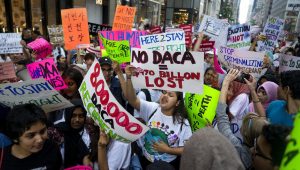 Rescinding DACA exposes the hypocrisy of the illegal immigration issue because lawmakers have not sought a permanent solution, which they have had ample opportunity to do so. Many lawmakers, for years, have refused to deal with the millions of illegal immigrants because of economic reasons.

So who is fooled by this symbolic, hypocritical action by the Trump administration to rescind DACA?

And do you really expect Congress to have the courage and will to do in the next six months what it has been unwilling and unable to do in last two decades?

Rescinding DACA exposes the hypocrisy of  the illegal immigration issue—punishing a small segment of the most innocent among illegal immigrants, while ignoring the need to address millions more.

Are Americans that gullible?