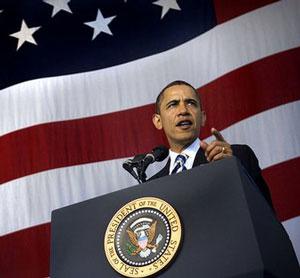 Whether we choose President Barack Obama, Michele Bachman, Mitt Romney, or someone yet to emerge, we can ill afford to be disinterested and disengaged. Investing time to do our own research to get beyond the distortions, sound bits and talking heads is required, if we are to make an informed decision.

Who we elect will be tasked with providing the leadership necessary to tackle some of the toughest issues we face as a nation. And, clear, balanced, and determined leadership is what that person will be required to do to move this nation forward. The healthcare reform issue has shown us how a divided government is ineffective. And there are critical issues beyond healthcare reform. Electing president of United States is of critical importance.

Minnesota Republican Rep. Michele Bachmann. Photo Credit: Public DomainOn the international front, we are in an atypical and interminable war on terrorism, despite the killing of Osama Bin Laden. We seem obliged to continue to have a military presence, at some level, in the unstable terrorist breeding grounds of Afghanistan and Iraq where we continually put thousands of our sons and daughters in harm’s way. We must remain vigilant of other hot beds of instability that could threaten our well-being: Iran, Yemen, and Korea. We must also remain ever so watchful here at home.

Our anemic economy, high unemployment, and unstable housing market continually make the American dream illusive for many. Our national debt and massive deficit continue to complicate long-term policies of what we do with major budget line items such as Social Security, Medicaid, and Medicare.

We are undermined in how to reduce our looming debt and deficit by a reluctance to fix the taxation system to make it fair and equitable for all — the rich, middle class, poor, and business. Republican Mitt Romney is the former Governor of Massachusetts. Photo Credit: Public DomainThere is the hot bed of immigration that continues to remind us of many intransient issues around race and ethnicity that defy efforts to resolve some long-standing problems. With the changing face of America, we can no longer ignore these challenges.
It begs the question, how can we address future advancement here at home and on the world stage when we face the immediate issues and problems that require solutions, now.
How do we invest in improving the educational system to ensure that our children will be able to move America forward and compete globally on all fronts? How do we continue to provide a safety net for the most needy and infirmed among us — disabled veterans, the elderly, indigent families, and children?

Jobs and the economy, looming debt and a growing deficit, the ever-present war on terror, an under-performing public education system, immigration and race relations, an emerging energy crisis, and the need for investments to keep America strong for the future — who do you think will provide the best leadership?

Now is the time to begin weighing the candidates and their qualifications. There is so much at stake.