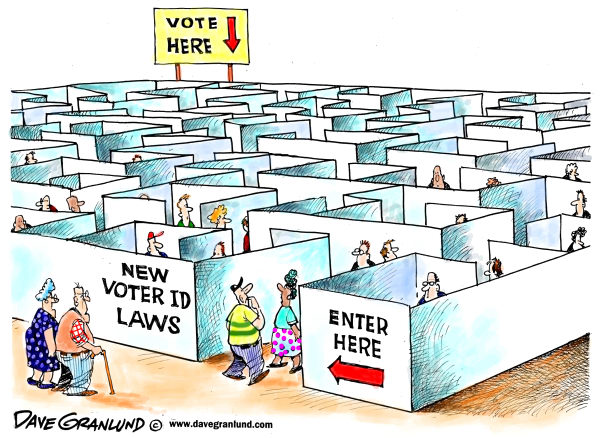 Exercising the basic right to vote

Exercising the basic right to vote is still a major issue in supposedly the greatest democracy on earth, the United States of America. Our history of extending this basic right to all Americans have, at best, been a spotty one. Perhaps, one of the main reasons is because originally the United States Constitution did not define who was eligible to vote, leaving that decision to each state to determine.

It seems that exercising the basic right to vote in this great democracy has been problematic for one group or the other ever since its founding. Voting, participating, and having our say in how we are governed, the essence of who we are as a country has been, and continues to be, seriously undermined.

One unintended, and some would argue intended, consequence has been getting government that was not of the people, for the people and by the people as we like to think and brag about. Well, maybe of, by and for a few.

At first, exercising the basic right to vote was extended only to white men who were property owners. Men and women who were not property owners could not vote in most states. Early in our history women could vote in a few northern states and jurisdictions if they owned property. Freed slaves and other non-whites could vote in a few jurisdictions if they met the property requirements.

But even the property requirement was eliminated for white men and they were eligible to vote in all states prior to the Civil War, and of course, has continued to be so. But consistently denied to others. Subsequent amendments to the Constitution prohibit any state from denying an American citizen the right to vote because of “race, color, or previous condition of servitude,” the 15th Amendment that passed in 1870; or on “account of sex,” the 19th Amendment passed in 1920.

We all know what those amendments have meant and haven’t. Many states have and continue to institute policies to make it hard for certain citizens to vote, most notably, blacks, Native Americans, and other “undesirable” minorities. The measures being adopted in recent years, and even today, also target the elderly with unreasonable identification requirements.

First, many states required payment of poll taxes or reading standards, which many minorities could not meet. While that has been repealed, having various forms of identification when you get to the polls has taken its place. Exercising the basic right to vote made harder in some states. Photo Credit: transequality.org

Many of the states requiring photo IDs have not been shy about saying that the new requirements are there to limit those who can vote and to effect the level of turnout in the 2016 Congressional and Presidential elections.

It is 2016, and many citizens will find it difficult, if not impossible to vote in these very important elections because they cannot get the required ID. And those most affected will be minorities and the elderly.

And we wonder why the country and the political process are suspect and so divided. We are still fighting over exercising the basic right to vote. Is this an America that all Americans can believe in?