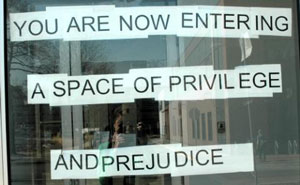 Institutionalized racism in education has gone on too long and continues to exact a heavy price when it comes to providing our children an equal chance for a successful future. One has merely to consider the degree of use and accessibility of technology as an essential tool in schools that boast of giving a high-quality education to see the institutionalized disparities in the educational system in the United States. The haves have access to the technology. The have-nots do not. The disparities exist along racial and socioeconomic lines.

A mother was talking with a colleague the other day and expressing her contradictory feelings about her kids, in grade school, already having access to the iPad. Most minorities and pupils in depressed urban areas tend not to have access to computers let alone the iPad, iPhone, or Ipod, notebooks and laptops.

If the present dialog about America falling behind on the international stage when it comes to the educational accomplishment and competitiveness of our children, or the challenge that exists nationally in closing the achievement gap between whites and blacks, does nothing else, it emphasizes the remarkable work that still needs to be done. We must ensure it is a priority to eliminate institutionalized racism in our educational system. That’s the only way to ensure that all children will receive the quality of education for us to stay competitive globally, have productive lives and become productive citizens to secure us as a country.

Institutionalized racism is so common and entrenched even undetectable in this nation that it appears ordinary to many. Practices in the educational process are merely a microcosm of it.

Freeze the digital or technological divide for a moment. The pernicious and institutionalized racism in education is evident in how resources are allocated, how students are assigned to learning tracks and teachers, and how we always push a curriculum with a deficiency, or even worse, the complete lack of black authors, inventors, scientists, and other contributors to American history. What other ethnic group has to take the burden of attempting to do justice to its history in a mere month?

Hispanics are the largest growing minority in America. Will they be confronted with the same problems as the minority of blacks they’ve surpassed?

Perhaps, if we are willing to completely confront the ugliness of institutionalized racism and tackle some systemic activities for long-term change, there may come a time when we can notice the closure of the achievement gap. America will not enhance its educational standing until institutional racism is faced head on.

Nothing reminds us of this as poignantly as the on-going discourse around affirmative action. Affirmative action was designed to rid this society of unequal educational opportunity, from grade schools to institutions of higher learning, along with other societal and economic inequalities.

It appears totally okay to give preferential treatment to students whose parents are alumni or have some other social, political, or economic standing, even if the students applying have a C average that is borderline. This is common practice at most elite institutions.

It would be interesting to find out how many African-Americans with C averages have been admitted to graduate school, or to Harvard Business School and Yale University or law school at the University of Michigan, for that matter.

There are those that would assert that educational achievement at any grade is based primarily on home life, parents, and economic status. While these variables definitely play a vital function, their effects are gravely undermined when faced by an unlevel playing field, which institutionalized racism injects into the equation.

Institutionalized racism in education, biased expectations in the classroom, approaches and practices, whether in grade school or college, continues to cripple many of our children and youth.

The infusion of millions of dollars into buildings, busing at the grade school level, and using point systems have done little to address the harmful approaches and practices that continue inside and outside the classroom.

Whether we like it or not, if we fail to seek and achieve remedy, our country and all of society will continue to pay.