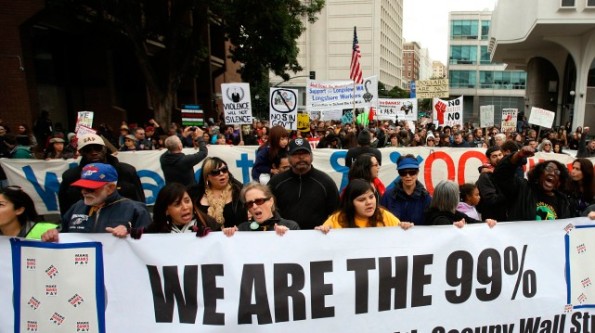 Occupy movements cut across race and ethnicity. Today marks two months of a movement whose goal and composition represent a microcosm of who makes up America and what being an American stands for…a rainbow of individuals and racial groups who are exercising their right of free expression.

Nothing binds like the understanding that a group is suffering because of power and control. One thing is certain, the Occupy Movement that now has spread into the main streets of a lot more than two hundred cities and commenced on Wall Street two months ago has struck a common cord among every ethnic and racial group which makes up the USA.

The unifying theme: There’s something rotten in Washington, where the 1 percent seem to be getting richer, even during this deep recession, while the 99 percent appear to be in a sea of striving. It actually doesn’t matter whether it is the person who has lost a job, and can’t seem to locate another, or the small businessman who can barely keep the doors of his business open because the very bank the government bailed out refuses to give him a loan, or the retiree, who stresses that their savings could evaporate without warning, they are all united in the belief that America is on the wrong economic road.

So America, what are you going to do? Are you going to ignore a movement that seems to not be abating and trust that winters cold or police force will drive the demonstrators off the streets? Have political leaders in the White House and Congress,  or the state houses and city halls, executives of major corporations, forgotten how America was formed in the first place? And, do you not believe that the same discontent for oppression in all its forms runs warm in the veins of every true American?

There is quite movement, which is crying enough is enough. For those folks who work hard every day striving to support family and country, they are proclaiming we won’t continue economically disenfranchised, to be exploited, and enable our displeasure to be dismissed. This declaration represents a common tie that binds minority groups, ethnicities, socio-economic standing, and individuals of ages.

The Occupy Movement is in the streets of 200 American cities today. How many more cities will join tomorrow, next week, next month, and in the months ahead?

America was formed by the revolution against taxation without representation and freedom of speech and religion. Will the movement against corporate greed and inequality in economic opportunity, which endangers one’s hope of ever attaining the American dream, be the force that reforms America?

We must not underestimate Americans ability to mount a show of force to bring about change. Our history is replete with examples.