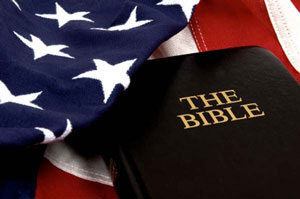 Religion influences American politics and public policy more often than many Americans would care to admit. Many Americans see it as normal, even positive. Others see the influence of religious beliefs as an infringement upon individual rights.Whenever it serves some political goal or is suitable, we are reminded that the separation of church and state is an important facet of our Republic. But is it? Has it ever been?

There are people who even act upon this belief, and wish to believe it, advocate for it. But a close look at this country’s history implies that religion and God have been present and promulgated.

God and religion were an integral part of colonial life and remain so in the 21st Century. Essential to the long-term organization of state and faith is that our founding fathers were seeking freedom from spiritual oppression. We reference God most of our sacred documents, from the  Declaration of Independence to our Pledge of Allegiance. There’s a reference to God imprinted on our currency and in the poetry of a few of our most patriotic songs.

The church or religion, in numerous places, remains a feasible and needed force in the eyes of most Americans, in a lot of ways.

Has there been an election in recent history where faith, the church, hasn’t wielded influence? Whether it’s the evangelical Christians, the religious right, the Vatican, or some other faith-based group, we cannot refuse the influence of religion in this country. And, such influence cannot be more apparent than in problems such as homosexuality and abortion. Those two issues alone seem to influence the actions of spiritual groups on the public or political period than any other, more than the scourge of hunger, war, and other states.

While at some degree in the public policy arena, the separation of church and state is a productive and favorable position, so is the strategic alliance and partnership. The Faith-Based Leadership Initiative that began during the George W. Bush administration understood the value in partnering with such a credible community institution to address several of the most pressing problems, especially in poor minority communities across the country. The primary aim of the Faith-Based Leadership Initiative will be to study and develop recommendations and execute strategies that are focused for the creation of major alliances designed to revitalize and strengthen ethnic communities in blighted and economically depressed urban areas. Members of the clergy should come together and appeal to professionals in the areas of education, health, and economic development to start a dialogue on the very places that define the standard of living.

Along with the founding fathers, many spiritual and church leaders have led the movements that resulted in economical, political, educational, and societal change. We now have only to think of St. Augustine, Martin Luther, Charlemagne, St. Thomas Aquinas, and St. Francis of Assisi. To bring it closer home, we have had Adam Clayton Powell, Martin Luther King, Jr., Jessie Jackson, and countless others who’ve made a difference in their own communities, if not, really the nation.

Wailing against abortions and gay marriages should not be the church in the modern public policy world and what defines, impacts and influences faith. The church, its leaders, and members, are doing considerably more to affect, shape, and enact public policy. Numerous spend great parts of the days, and nights, trying to make the lives of the neglected and downtrodden better by making attempts to improve housing, reduce offense, spur economic development.

Separation of church and state? Why not invent a stronger alliance to undertake those tenacious problems that plague communities all across this country, whether in the place of quality educational achievement, decrease in offense and blight, or the stimulation for much-needed economic development?

Is the church’s influence benefitting from its fullest potential?