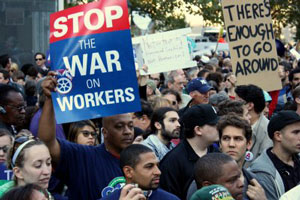 Occupy Wall Street movement, is America slipping into its autumn? Cycles and defining occasions, whether in a person, an institution, city, or country’s life, tend to be compared with nature’s seasons.

We describe the mature phase of life as our summer, the aging as our winter. Citizens across Arab world’s awakening, needing a more democratic and better life earlier this year, was dubbed the Arab Spring. Nuclear winter is used to describe the scenarios that were gloomy after a nuclear explosion.

Could it be that the Occupy Wall Street movement is Americas and the worlds’ fall? With Occupy protests occurring in more than 600 communities across the nation, 80 of them in major cities, does that mean changes that are imminent as autumn, are about to happen all around us? And as autumn may not foretell how quickly or how rigorous the winter might be, it accurately predicts that a change in the weather is upon us.

America, are we paying attention to the winds? Are we taking them seriously enough? Or, will we sit by, expecting them to subside, die down with a whimper? When one considers the demonstrations that began as non- violent are actually becoming more confrontational, the likelihood that the storm will pass over grows even more skeptical. The occupy Wall Street movement is real.

We’ve only to recall how the Civil Rights movement and the protests against the Vietnam War began. Oh, the hazards of short-term memory.

Does the Occupy Wall Street movement mean that America is going into the fall stage of its history, and will the leaders and those in power understand what is occurring and have the bravery to take measures now to shift its path and prevent a terrible and long winter? If you consider the list of grievances that fuel the Occupy Wall Street movement, at a minimum it signals America’s season of discontent.  There’s ever-growing intolerance of the economic and social inequality that pervades our way of life where most wealth dwells with 1 percent of the population, leaving the remaining 99 percent working  disproportionately hard, or barely able to get by.

The brazen and clear greed that characterizes the monetary sector on Wall Street and big corporate boardrooms across America continues within an atmosphere where small businesses cannot get loans to keep their doors open. And jobs and businesses are vanishing at lightning rate.

Determination, on the part of some, to keep an unfair tax code that always benefits the wealthy while damaging the middleclass is sabotaging the economical well being of the entire country. Inferior regulatory oversight, that turn a blind eye to the pillage and pilfering of natural resources, always puts the earth’s environment in danger.

The list represents facets of exactly the same cloud: The constant dissipation of striving to attain the greatest good for the greatest number of people. In the end, isn’t it the bedrock that sustains a healthy and vibrant society?

Like some weather forecasters, many politicians and pundits would like to say the movement is a weakening hurricane because it lacks a defined eye or galvanizing center or a bluster that will blow over. This position is being taken by them because they claim the movement doesn’t have a unified position, or seeks to answer a compelling mobilizing question. Occupy Wall Street Movement should not be ignored.

One could get that impression after a cursory review. But a deeper probe reveals a really unifying topic: Many Americans have grown tired and exhausted of the increasing decline in the economic, political, educational, and environmental conditions of this country which have been brought about by inequities and differences in public policies and private financial practices. The fury and discontent are quite focused toward decision makers and inept, corrupt leaders in both the public and private sector.

There are always warnings when there is a storm on the horizon or when the seasons change whether it’s a straightforward thunderstorm, hurricane, tornado, or tsunami. Most people have begun to understand we should heed the warnings and take proper actions correctly to prevent, avert, or minimize some forthcoming disaster.

But there are some who, regardless of what the signs might foretell, choose to disregard the ramifications at their own peril.

The Occupy Wall Street movement has gone to main streets throughout America even across the globe, supporting the notion that as America goes, so goes the world. We definitely aren’t Egypt or Libya, and while we’re not Greece or Italy, some of the same winds of economic unrest buffet us.

What will it be, America? Another fall, like innumerable others, that have warned us that winter is upon us? Or, an autumn, that will bring a winter that could change, in a bad way, our landscape forever, because we chose to disregard the signs?

We have an opportunity to heed the warnings and take corrective actions before a disastrous change is sustained by us, which could impact our way of life for a long time to come.

Will we heed the signs, change our course?