Lessons We Humans Can Learn From Animals Photo Credit: bestofgreenscreen

We have all heard the saying, “They fight like cats and dogs.” But there are lessons we humans can learn from animals. First, all cats and dogs do not fight each other. Many, if not most, get along just fine. Actually, our cat takes naps on our dog’s face. However, that has not always been the case. One of our previous dogs found great pleasure in chasing and terrorizing one of our cats. So clearly, it all depends. But, depends on what?

One could speculate that maybe our current dog and cat get along swimmingly because they grew up together and shared their kitty and puppy days. That is partly the case. But, the dog has also been accepting of older adopted cats that were complete strangers with different temperaments. There is no fighting, no chasing. They all get along. Lessons we humans can learn from animals—our cats and dogs for instance—are that they couldn’t look more differently, and while growing up together or meeting as strangers, they still respect each other, live peaceably under the same roof, and often do things together. So why do they seem to have something in common, and often we humans do not?

We have a neighbor who loves animals, especially horses. On any given day when we pass by her farmhouse, it is not uncommon to see horses (large and miniature), donkeys, mules, sheep, goats, even peacocks, turkeys, and chickens of various breeds—all grazing and scratching alongside each other. We have yet to witness a dispute or scuffle between or among any of them during nearly two decades we have been neighbors. Plus there are also dogs and cats. What lessons can be humans learn from animals getting along despite their differences?

One could easily dismiss this example by saying, oh your neighbor operates a petting zoo, or she carefully picks docile animals. She does not. There could be another likely explanation. She loves animals. She shows it in her actions, her tone, her body language and how she cares for them and communicates with them. The animals see and feel her love, and they behave toward her and each other accordingly. Could those be the lessons we humans can learn from animals? 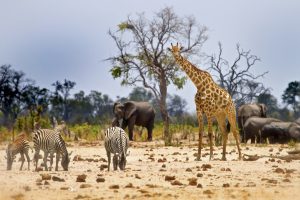 Lessons We Humans Can Learn From Animals.
Photo Credit: paulafrench

Several miles over as I was riding in the countryside, I looked over at a pasture with cows, Shetland ponies, elks, alpacas, and zebras. I thought to myself, what is it that we humans do not get? Those animals don’t speak the same language, certainly do not look alike, and yet they all seem to get along. Lessons we humans can learn from animals all around us.

This harmony, respect, and acceptance I just described among farm animals likely exist among many animals in the forests and jungles, even in the sea. Of course, there are those that do not get along, that prey on each other, and that live in fear of each other. But there are lessons we can learn from animals like them, too. It is all about choice, training, exposure, acceptance, about how we choose to live with each other.

What lessons we humans can learn from animals!