Misleading the Public Is Very Dangerous and Destructive

American Why Can’t We All Just Be Americans? Photo Credit: IPGGutenbergUKLtd

There seems to be certain identifiers attached to some groups of Americans and not others. Why can’t we all just be Americans? Have you ever stopped to ponder why not?  Could it be simply because of skin color, or how one group looks versus another? It is past time that we stop embracing the systemic, artificial, and inhumane labels that divide us rather than unite us.

One thing is for sure, it certainly cannot be because of where groups immigrated from, or when they did so. America has been made up of immigrant families since the beginning, and still. Native Americans, the Indian tribes that occupied the lands before all of us immigrants came, are the only indigenous people. So why have some labels been consistently used as identifiers to set some immigrant Americans apart?

Some groups and not others are reminded at every opportunity that they are not considered to be just Americans. It happens every time when it comes to filling out papers, getting a job, when it comes to navigating most aspects of American society. It is commonplace to be asked whether you are African-American, Asian-American, Hispanic-American? Have you ever seen a form of any kind that included boxes to check and that required someone to identify as Italian-American, Polish-American, German-American, Jewish-American, Irish-American, etc., etc., and etc.?

Out of all of the immigrants to America, Blacks formed the largest group that was brought here against their will, as slaves, when this country was formed. The ancestry of most American families immigrated here of their own accord, seeking a better life. No matter what their ethnic identity, they have been able to assimilate, to become just Americans. But it is not so for blacks, Asians, and Hispanics–and blacks particularly.  Members of all groups work and die for one America. 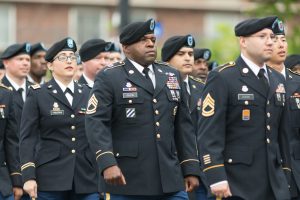 Why Can’t We All Just Be Americans?
Photo Credit: Roberto-Galan

What is the redeeming value of hanging on to those labels for some groups and not for other groups. There is no redeeming value when the sole purposes of such labels are to maintain social divisions, to deny equal treatment,  to deny equal opportunity, and to deny  equal access to all that being an American should afford?

It could be argued that blacks, Asians, and Latinos bear some responsibility for holding onto and perpetuating those labels as they have tried as groups to assimilate or fight for equal rights and opportunities. Some could argue that these groups have tried to hang on to their culture and identity from their homelands. But other groups have, too; they practice and pass down family traditions and cultural practices from their homelands. Yet, they are not confronted with their immigrant identity at every turn, on every form they have to fill out as they live and work in America.

Have you ever thought about why some Americans are still identified legally as separate when they have been here as long or longer that other groups of Americans? Members of all groups work and die for one America. Not a white America, not a black America, not a yellow or brown America, but for America.

Why can’t we all just  be Americans? It is a question worthy of serious consideration.