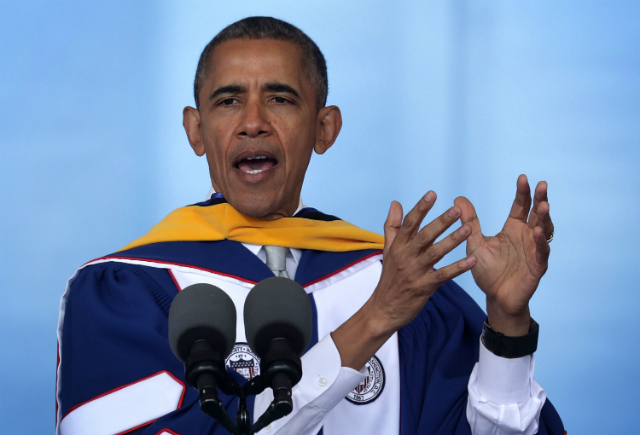 Obama has message for activists

President Barack Obama has a message for activists and it is one that can be applied across race and ethnicity, for all who speak, act and work for a cause. His message for the ages, and for all of us who has a cause we care about, was delivered during his commencement address to graduates of Howard University.

While Obama spoke to a predominately black graduating class at one of the nation’s oldest Historically Black Colleges and Universities, there is great advice for those of us who fashion ourselves to be activists in words or actions, and who have been at it all our lives or just beginning. Obama has message for activists that resonates.

In his remarks, Obama acknowledged, and urged the young graduates to also acknowledge, how far America has come in the last fifty years in many areas. One of the areas he noted was race relations. There are signs all around: More African Americans are graduating from high school; many more are earning college degrees; there are more black elected officials at every level of government; blacks are senior executives and CEOs of major corporations.

But with this progress, Obama readily acknowledged that America still has a long way to go.  Racism and inequality still persist. There are still efforts to deny or make it harder to vote. The justice system still greatly discriminates against young blacks and other minorities.

There are socioeconomic gaps and poverty that affect blacks and whites. While the economy is improving, many people are still hurting and finding it very difficult to make ends meet. Obama has message for activists, which he indicated those graduates could choose to become, made it clear that there is so much still to be done to make life in America better. For those in that graduating class or those of us who want to help address these challenges moving forward, Obama’s message made it clear that there are things that we must do to be effective.

First, we need to be confident in who we are, whether you are black, white, Hispanic, Asian, whatever your race or ethnicity. Second, we need to be acutely aware of our history, our struggle. No one can meet the world in ignorance or with a sense of entitlement. You must understand the other person’s perspective, fight and work hard to find common ground and a path to meaningful change.

Third, we not only need passion about a cause but a strategy that can be put into action, which might include not just creating awareness, but mobilizing votes and other actions on every level, all the time. And, fourth, you can just speak out. You must listen as well, especially to those with whom you disagree. You will not effectively implement your strategy without understanding the opposition.

All activists must realize that progress requires building allies, making compromises and staying the course. You commit yourself to a cause that is bigger than yourself and you work at it, in some way, every day. It often take years and decades to realize meaningful change. All we have to do is look at history and the activists who have gone before us.

And what a great message to keep.