An atmosphere of racial fear engulfs America, along with racial hatred, suspicion and disrespect. If we are honest with ourselves, we know it exists in our community and  communities all across the nation. Why, and how did we get here in 2016?

Why? Why are we seeing so much gun violence and loss of life as a result of a wanton, often baseless racial fear? From the killing of a black man in Baton Rouge, Louisiana, and another in Minneapolis, Minnesota by white police to the killing of five policemen by a lone black gunman, all within a week. Relations between blacks and police seem to be getting worse not better. How can we see incidents like these and not acknowledge that an atmosphere of racial fear engulfs America?

But, why? One basic reason is because after the feelings of shock and horror subside after each horrific incident, and another issue grabs our attention, we go on with business as usual. Most of us never stop long enough to honestly examine the attitudes, conditions and practices that exist around us, fueling the atmosphere of racial fear that engulfs America. 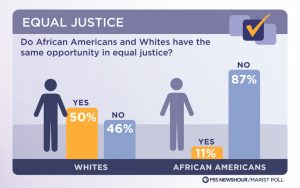 How do we continue to be stuck in a place where we allow racial bigotry, much of which is ill-founded, to govern our thoughts and actions, still in 2016? This atmosphere of racial fear, hatred, suspicion and disrespect is not new to America. We only have to look at our checkered history of race relations, from the pernicious institution of slavery, a blatant Jim Crow justice system, to stubborn inequality and discrimination when it comes to access to quality educational, employment and housing – even the basic right to vote.

Yes, we have made some progress, but too many of us still believe that there is no race relations problem or we deny that the root causes of an atmosphere of racial fear and hatred have nothing to do with us. We are all too willing to absolve ourselves of any responsibility in why or how race is still a divisive issue in America.

It is like a recurring cancer. And, like cancer, it can and will kill us if we miss the chance to take definitive and real actions to eradicate it. This atmosphere of racial hatred engulfs America and could at a minimum radically effect our quality of life.

The killing of two black men and a five police officers, all in one week in three cities with protests across America, is a watershed and epochal moment. As policy makers, elected officials, community leaders, law enforcement, educators, employers, and regular ordinary citizens, we can choose business as usual at our own peril.

What will we finally do about racist policies, practices and pervasive racism in America?