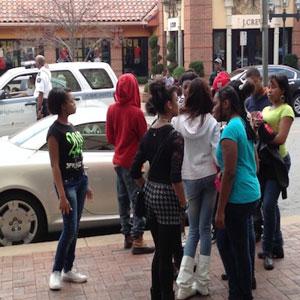 Summertime is a time for many things. For teens all over the nation, it is often seen as a break from school — a time to hang with friends, earn a little money with a summer job. At least this is what summer might mean for the lucky ones. But, for too many minority teens, it is simply not the case.

For millions of minority teens and pre-teens, summer does not mean a job and healthy venues to hang out with friends. Instead, summertime means loitering, idling the time away because there is nothing meaningful to do. If minority kids, mostly poor and mostly black, are able to avoid problems and getting into trouble, too often, trouble will find them.

Ask youth agencies, government officials, or just casual observers in any major metropolitan area whether there are enough activities for youth in the urban core; the answer would be a resounding NO. Poll parents and you will likely get the same answer.

Everywhere we look, there are signs that youth between the ages of ten, and nineteen do not have enough positive programs and outlets where they can constructively spend their time. A nationwide problem is manifesting itself in different ways.

Many of us have either heard or read about the thousands of young minorities who gather in downtown areas on weekends, crowding the streets from one end to the other. While proprietors and patrons alike acknowledge for the most part they are well behaved, their presence nonetheless is perceived as menacing.

While many meetings have been held with key community, governmental, law enforcement agencies in respective metropolitan areas, lasting solutions still are not being put in place.

Experts who deal with pre-teens and teens all the time will readily make a distinction between youth activities and youth development programs. Simply put, the former is designed more to fill the time, the latter is more focused on developing and/or enhancing skills.

Unfortunately, most metropolitan areas are lacking enough in both.

We all know too well, what the absence of meaningful programs for minority youth brings. Aside from loitering, the problems of gangs, teenage pregnancy, alcohol, and substance abuse are direct by products of the absence of constructive engagement. Oppression of minority teens is harmful to them, their families and communities.

The problem of addressing the needs of our pre-teens and teens must be positioned higher on the radar screen for those who can do something meaningful about it: policy makers, civic and business leaders, parents, the faith community, school administrators, and public and private funding agencies.

What to do about the thousands of teens who gather in adult venues all across America on hot summer nights, how to stop the development of gangs, and how to keep young fertile and impressionable minds from wandering into mischief and harmful activities are simultaneously short and long-terms problems that will require short and long-term solutions.

We need not reinvent the debate. A meeting here and a meeting there will not get us where we need to be. Thinking we can arrive at meaningful solutions without making a long-term commitment to designate the necessary dollar resources will be just fooling ourselves.

Efforts to change the landscape for our poor and disadvantaged young people in urban settings all across America will be more like a marathon, than a sprint. If we really want to provide quality out-of-school experiences that will enrich their lives rather than be a vacuum filled with activities that are detrimental to their well-being and that of the communities in which they live.