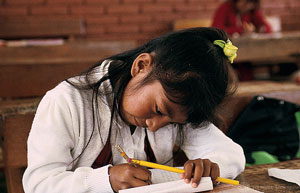 An unequal education system persists for blacks and Hispanics. Is it America’s version of apartheid in the Twenty-First Century? Another study affirms that there’s a pervasive practice in schools where blacks, Hispanics, and poor kids are constantly and consistently refused an equal opportunity and an access to achieve a quality instruction.

This translates into a situation where those who need a good education the most to reach their potential to improve their standard of living are relegated to some economic and societal state from which they are able to never escape.

The latest study to be released this week is one which was conducted by the Schott Foundation about the country’s largest public school system the New York public schools. The study, “A Rotting Apple: Education Redlining in New York,” confirms that there’s an inequitable distribution of educational resources at every level, including the most important resource of all, qualified and experienced teachers, among blacks and Hispanic pupils and children who are poor.

Consequently, these kids have a slim to none chance of learning the skills needed to succeed in anything. Poor children definitely have little possibility of graduating with the skills that are necessary to attend college, a trade school, or get an adequate occupation. Unequal education system persists to many children’s detriment.

The study reveals the evidence of inequities and sub-standard educational practices are blatant, and seems to be an acceptable norm. “Unequal learning opportunities for poor students and students of color have become the status quo in New York City,” according to John Jackson, president of the Schott Foundation.

Jackson goes on to say that, “The current policy landscape in New York does very little to give these young people access to the support, types of schools, or experienced teachers that give them a substantive opportunity to learn. We need creative leadership to promote greater equity and alignment so the city no longer relegates our neediest children to the most troubled schools with the most limited resources, thereby limiting their potential for future success.”

But the creative direction must be coupled with real contrition and resolve about this harmful practice to discontinue, and work for change until oppression in education is abolished here in America.

The catastrophe is that the study of the Schott Foundation validates that what is occurring in New York public schools is also happening all across America. The recent nationwide K-12 Data Collection report ran by the U.S. Department of Education’s civil rights office paints a depressing and disturbing image of how blacks and Hispanic pupils are handled in the nation’s schools, regrettably the bulk of the country’s schools. The data were gathered from more than 72,000 schools that represent 85 percent of all students. An oppressive education system for blacks and Hispanics

This study also shows that Hispanic and black pupils are set on a track of underachievement. In addition to not having quality, experienced, and well-paid teachers, these students are in classrooms where tools, the educational materials, technology, and other resources are not adequate, aged, and insufficient. The report highlights a high percentage of teachers in schools with the greatest black and Hispanic enrollment had taught two years or less. Those teachers will also be paid significantly less than their counterparts in other schools.

Are we letting the old vestiges of racism reign? It may have worked in centuries past. It will not continue to work and propel us forward in centuries in the future.

Why can’t we as Americans, not comprehend that?