Other Devastating Costs Caused by Covid

Many are using their elective offices to downplay the seriousness of the virus and to minimize the need to get a vaccine or to wear a mask. Yet they have secretly been vaccinated themselves. Those same politicians are refusing to issues guidelines and mandates as if the Delta variant surge is not happening. Such partisan politics is defeating the fight against Covid.

Infections are increasing. Deaths are on the rise. All the data show that the surge in infections and deaths are occurring among those who have resisted, and continue to resist getting a vaccine. They also continue to dismiss wearing a mask. The worse infections, hospitalizations, and deaths are occurring in states where there are Republicans governors, legislatures, mayors, etc. No matter what the doctors and scientists are saying, partisan politics is defeating the fight against Covid.

It is heart breaking and mind numbing to see and hear the reasons given for not getting a vaccine or wearing a mask—from conspiracy theories to blanket denial that the virus is real. Such reasons are given in the face of broad spread illness and ongoing deaths. It seems that many Americans are living in two realities—all because some leaders and media outlets are promoting lies and misinformation about the virus solely based on political agendas. Such partisan politics is defeating the fight against Covid, causing irreparable harm to many. 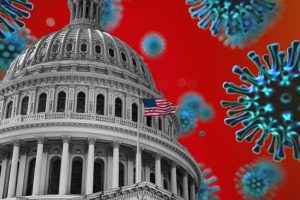 What about the conditions in our daily lives? Do they count? We have an economy that is struggling; many employees are still working from home or totally out of work; children are unable to return safely to school; hospitals are once again being overrun, and healthcare workers are over extended. Yet, many chose to believe the misinformation they are told, not what they are experiencing in their daily lives. The rampant partisan politics is defeating the fight against Covid.

How many more hospitalizations? How many more deaths? How much longer will it be before the country gets back to some normal way of life?