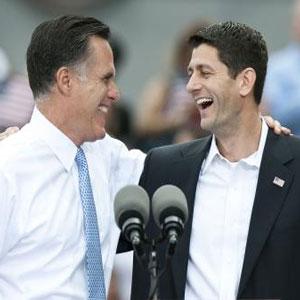 Romney and Ryan on minorities and the poor should give any caring American pause. Their views are a throw back to bygone eras and extreme philosophical views about the role of government in a free society.

Maybe it’s too early to answer that question conclusively. But both Ryan and Romney have supplied ample clues. One could reason the emerging Republican Party has provided numerous indications too. Just examine the voting record, or the lack thereof, of the sitting Republican Congress. Look at the sway of the Tea Party, which has no significant representation of the poor or minorities. Romney and Ryan on minorities is worth a closer look.

Paul Ryan is most known for the Ryan proposal, which purports to balance the budget by cutting discretionary spending, reduce the national debt, and erase the shortage over the next several decades. How does Ryan intend to do that? By going down a one-way street called CUTS. What about generating REVENUES. Anyone who understands anything about balancing budgets understands that there are two sides to the equation.

The Ryan budget plan desires to cut Medicaid and other entitlement programs that would directly affect the working poor and disenfranchised. Yes, there are still millions of folks in America that don’t have equal opportunity and therefore cannot pull themselves up by their boot straps. Romney and Ryan on minorities.

Provided an equal opportunity to work and to learn, most Americans — white, black, Hispanic, and Asian — would take advantage of it. But the vestiges of classism and racism are alive and well all over America — still. So the hard-work, self-reliant mantra the Romney Ryan ticket chants simply does not comport with reality.

Romney and Ryan on Minorities

Where’s the moral compass that would permit you to continue to propose an unjust taxing system that gives rests and benefits to the wealthiest among us while penalizing the bulk who works one or more jobs to make ends meet and try to realize in some measure the American wish of home ownership, a good area to live, and quality schools?

What moral compass guides your decision to cut on meager resources to the poor, the infirmed among us, and maimed who cannot fend for themselves? We are not speaking of the healthy able-bodied few that take advantage of the system. Yes they should be weeded out and booted out.

How can you boast of equity and balance when specific components of the budget are sacrosanct? Tax cuts. The Military.

There are methods to get our financial house in order as a state. But it cannot be the same old game of pitting the “Haves” against the “Have Nots,” the weak and vulnerable (minorities, the poor, the aged) being tooled around and manipulated by the rich and the strong.

The past appears to be prologue. Only in place and this time in our history, we must avoid being anachronistic in our political policies. America is a nation that’s varied with regard to its citizens and the socio-economic states that define them. Any actual solution will need to be inclusive of issues and answers for all Americans, not just the privileged few.

Vice Presidential and Republican Presidential runners should they be elected will need to be all America’s leaders.

Where do minorities and the poor fit within their platform and vision for America?