Why was Michael Brown killed by police rather than stopped by some other means? Why did he have to die, and how can we as a nation and communities across America prevent such incidents from happening?

Who was Michael Brown, Jr, and why was he killed by police while walking down the streets to his grandmother’s house with a friend and unarmed?

From what we have learned, Michael Brown was a teenager, recently graduated from high school, and was to begin his freshman year at a technical college, but was killed the day before he was to begin. Apparently, he did not have a history of delinquency or brushes with the law. Why was Michael Brown killed?

Following the shooting, the police department released a video showing Michael Brown had entered a convenience store and taken a box of cigars without paying for them.

While an objective observer tries hard not to rush to judgment, one must ask why young African-American men are arrested or killed by law enforcement more often than whites for the same or similar offenses, or worst yet no apparent infraction at all.

Is it a matter of race, stereotypes and long-standing prejudices still seizing the moment and causing irrational behavior – on all sides, or particularly law enforcement? 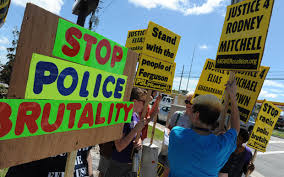 Why was Michael Brown killed by police. Photo Credit: brandenton.com

More importantly, what will it take for such destructive beliefs and practices to end?

When the protesters have been silenced and Michael Brown’s death has been supplanted by another breaking news event, what will be do as a civilized society to address the root causes of bad race relations in this country? When?

How the circumstances surrounding Brown’s death have been handled only fuel more mistrust, disrespect when it comes to improving relations across race, culture, ordinary citizens as well as those in authority. How is that in 2014, we have people going to the streets to demand information that should be readily forth-coming?

Until we get at the root answers to these questions and commit to making corrective change, it is just a matter of time that another tragic incident like this one, or worse, will occur.

When the protesters have been silenced, and the tragic death of Michael Brown will have been moved from the front pages of the nation’s newspapers and no longer is the lead story of the evening news, what will we do as a nation, as a city, as a community, as individuals to examine our actions, beliefs in an effort to make things better?

That is the question. That is the challenge that we all should address within our sphere of influence, which we all have whether we elect to use it or not.

There will be no lasting change if we choose to continue to think and act like the problem is about “them” rather than about all of us.

Why was Michael Brown killed? What are the Real reasons?