With revelations and accusations of sexual harassment, sexual abuse and some other form of sexual misconduct dominating the news, women are mobilizing to gain dignity and respect in the workplace. A new Women’s Liberation Movement seems to be in the making to achieve something that the last movement did not.

Unlike the Women’s Movement in the late 1960s and early 1970s, which sought to change the role of women primarily in the workplace, this emerging movement is seeking to change how women are treated in the workplace.

While the fight against gender inequality, when it comes to earned income and job promotions, has made gains in the last fifty years, a massive more degrading problem has been tolerated, ignored, or swept under the rug by both men and women. But, women are mobilizing to gain dignity and respect for themselves and future generations. 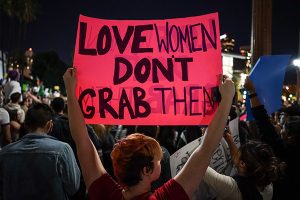 Despite being qualified, or often overly qualified, to perform the work associated with their jobs, many women are propositioned, threatened, cajoled, or cornered to engage in some unwanted sexual advances if not, indeed, sexual acts. Some are able to flee, deflect or ignore. Many are not. So they find themselves between a rock and a hard place, or facing no career growth, a demotion, or worse a gentle boot out the door.

So what have so many women resorted to in the past? Silence. Self-blame. Shame. And, worse of all, accepting and tolerating such sexual misconduct as a normal part of the workplace. But with all the recent sexual harassment allegations, women are mobilizing to gain dignity and respect in the workplace.

During the last fifty years, women have been successful in getting into the workplace. But, they have not been successful in maintaining a standard of treatment. Women are mobilizing to gain dignity and respect. They are no longer willing to take a job or keep a job should their male boss or colleague invade their space with inappropriate sexual behavior.

The Silence is broken in a mighty way. Where will this new women’s liberation movement lead?