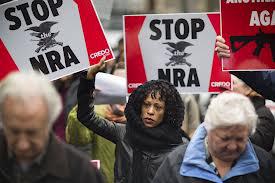 Gun control eludes America when most industrial nations, and even smaller poorer nations, seem to have put in place laws that reduce if not almost eliminate gun violence. When will most Americans demand meaningful gun control?

To own a gun is to be American. The right to do so is second only to the right to speak. That preeminence and priority is a good indication of how deep the love of guns flow in many Americans.

Will America be able to enforce meaningful gun control when there is such deep-seated love and obsession for guns in our society?

The right of people to keep and bear arms as stated in the second amendment was trumped only by the right to use language whether in speech, the press or peaceful assembly as outlined in the first amendment to the Constitution of the United States.

But does the second amendment mean: If the use of conversation, dialogue or reason does not resolve an imminent threat, we have a right to resort to the use of military style semi-automatic guns with extended clips of ammunition?

If our forefathers and framers of the Constitution were able to see what unregulated gun ownership has wrought against innocent unsuspecting Americans – young and old alike – do you think they would be willing to revisit the right to own and bear arms?

The forefathers, no doubt, wrote the Constitution after a long-fought and bloody Revolutionary War to gain freedom from what was perceived then as an oppressive mother country, England.

Fast forward to the 21st Century, and maybe we can take a few lessons from the country from which we fought so hard to disassociate ourselves. Today, England average only 35 deaths per year from guns compared to over 11,000 in the United States.

They only had to have one mass shooting in a school before they passed a strict law banning high-powered semi-automatic weapons. How many school shootings have we had in the United States and still we do not have a ban on high-powered military-styled weapons? Semi-automatic guns, with extended clips that can hold any where from 10 to 50 rounds or more, are readily available for the unlawful and law-abiding alike, the sane and the crazed, patriots and anti-patriots.

How deep is Americans’ love of guns and tolerance for the indiscriminate violence, death and destructions they cause not just in the all-too-frequent mass shootings, but the injuries and killings that occur in communities across the country on a daily basis?

It has taken the horrible shootings of twenty six and seven-year-old first graders at Sandy Hook Elementary School in Newtown, CT to at least begin a national dialogue on what we need to do as a country to better regulate access to guns.

President Obama has signed twenty-three measures by executive order, all designed to close loopholes and curb wanton gun violence. But the real measures must come from policies and legislation by the United States Congress.

Congress is currently holding hearings to determine what measures would make the most sense, would be the most enforceable and achieve the desired results. But even before those hearings are completed, members of Congress are already saying a measure to ban high-powered semi-automatic assault weapons will not pass.

In the meantime, the random killings in our schools, our neighborhoods continue.

What will it take?