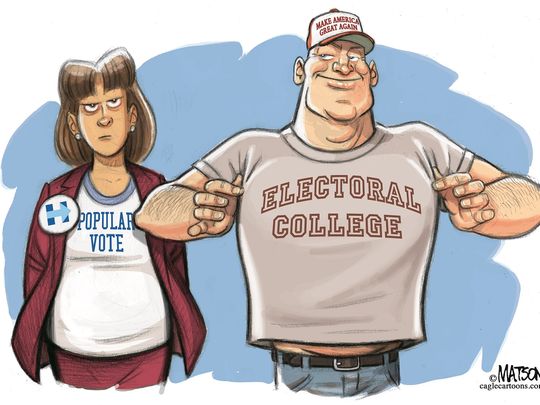 The popular vote and the Electoral College. Photo credit: AZCentral.com

This is the second of a series of articles about the identity crisis confronting America here at home and on the world stage.

The popular vote and the Electoral College provide a good example of the identity crisis confronting America. It begs the question how many of us truly understand how or why a candidate that does not win the majority of votes cast can indeed become the President of the United States. Why should winning the most electoral votes decide instead?

The framers of the Constitution did their best to put in place a measure that they thought would insure the fairness and integrity of equal representation among voters in this most important decision. That the selection of the President could not be determined solely by the largest states with the largest populations, leaving voters in small or middle-size states at a disadvantage.

The final decision of who becomes President is based upon the vote by the 538 electors, or members of the Electoral College, who represent the districts of the House of Representative the Senate and the District of Columbia. Who are the 538 electors? Each state gets one vote for each of their House and Senate representatives, which would be a total of 535 (435 members of the House and 100 for the Senate). The District of Columbia has 3 electors. 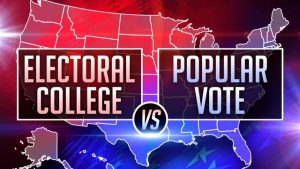 The Popular Vote and the Electoral College. Photo Credit: KIFI.com

While the process might seem crystal clear, it really is not easily understood by many voters. No matter how many popular votes a candidate might get, they must also win 270 of the United States Congressional districts (representing those in the House and Senate) to become President. Donald Trump won the most of the Congressional districts, 306 of them while Hillary Clinton won 2.86 million more actual voters, the popular vote.

On Monday, the 538 members of the Electoral College will officially cast a vote for President, the results of which will not be known until January 6, 2017.

But, in the meantime, there are many who would like to revisit the role of the popular vote and the Electoral College in determining who ultimately becomes president of the United States. There continues to be misunderstanding, misleading information and beliefs among concerned citizens. Over 52% of Republicans believe Donald Trump won the popular vote. More and more Democrats believe that Russia and FBI Director James Comey cost Hillary Clinton to lose key states. This only adds to undermining an electoral process that has worked for centuries.

Do you think the electoral process that we have used for the last 227 years should be changed? Can it no longer protect the democratic process we hold dear in America? The popular vote and the Electoral College. Can they not remain a pillar that is so much a part of America’s identity as a strong Republic whose democratic process still stands out as the most honest and transparent in the world?

The popular vote and the Electoral College. They need not further divide America when they have worked so well together. They both are critical components of our, and America’s, identity as a nation.