Whether it is madness born of mental illness or an extreme religious or political ideology, it is time to redefine domestic terrorism regardless of the motive. More importantly, steps must be taken to prevent it from occurring. If the perpetrator did not have easy access to high-powered military style guns, the two incidents of mass murders of the magnitude that we have seen in the last month would not have occurred. Period.

It is time, past time, to implement better gun control policies in a country that boast of being among the most civilized in the world. And, boasting is all it is since we lead the world in gun ownership, and incidents of mass murders. There are valid studies that confirm that the primary reason the United States has among the highest incidents of gun violence is because of the number of guns in circulation.

It is time to redefine domestic terrorism regardless of the motive. It is domestic terrorism when a madman or madwoman randomly kills innocent people in a public venue whether he/she has extreme religious, political, ideological views, or is suffering from mental illness. 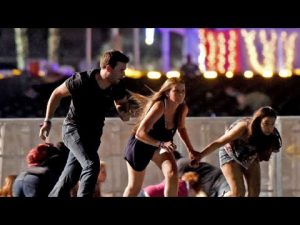 Time to Redefine Domestic Terrorism Regardless of the Motive. Photo Credit: YouTube.com

If you take a semi-automatic or rigged automatic gun and walk into a church, a bar, a shopping mall, a crowded theatre, or set up a tripod in a hotel window as a sniper and begin rapidly firing that gun, killing unsuspecting innocent children and anyone within sight, it is domestic terrorism.

It is terrorism that happens because such “apparently” random acts wreak havoc, death, and destruction on innocent people, their families, their communities and the entire nation. It is time to redefine domestic terrorism regardless of the motive. Such acts of terror are a direct threat and infringement on the inalienable rights of life, liberty and the pursuit of happiness afforded all citizens. Just think about it.

What is the difference if such heinous acts are committed or inspired by a member of some extreme group, a lone wolf, or deranged person? In many ways, they all suffer from mental illness. The senseless carnage, the wanton loss of innocent lives, is the same.

Most of these incidents are well thought out and planned regardless of the state of mind of the shooters. It appears there is sanity amid the madness.

It is time to redefine domestic terrorism regardless of the motive before it becomes, and is accepted as, a normal part of life in America, resulting in those inalienable rights of life, liberty and the pursuit of happiness being severely diminished.