While freedom of speech is a treasured and guarded privilege of American democracy, freedom of speech without responsibility is not. Speaking with little regard for truth, facts, and potential harm is downright dangerous and destructive. Reckless speech can do irreparable harm.

Yet, today, our public discourse has been filled with false, incendiary, conspiratorial, misleading speech from elected officials at the highest level of government, and many of their activist followers. And, what has been the results? Americans are suffering in immeasurable ways. Disbelief in the existence of a raging global pandemic has killed hundreds of thousands of Americans and infected million more. The coronavirus continues to rage—all because of freedom of speech without responsibility.

Another result is that many Americans really believe that the Presidential election was fraudulent and stolen because an incumbent president lost and claimed it was stolen from him even though members of his party won all down the tickets across the states. He predicted a year before the election that it would be stolen. Even after exercising every option through the court system and losing every claim, the false and reckless speech has not stopped.

Such freedom of speech without responsibility aroused, motivated and encouraged an insurgent mob to viciously attack the seat of our government with the purposeful intent to do damage to the U.S. Capitol building, and inflict personal harm on the nation’s elected officials. People died and many people were injured. 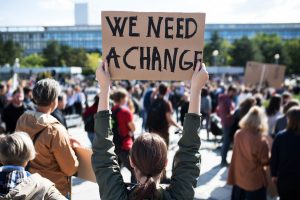 Unending false, alarmist, reckless, and inciting speech for years from elected leaders and their followers have fed and encouraged social, racial, economic, and political divisions in this country that hearken back to bygone and ugly periods in American history. Many of those being misled by freedom of speech without responsibility actually believe that they must take the country back to those racist, separatist times.

If we are not careful one of the aspects of our democratic republic that we value the most will also be our undoing. When it comes to the current health, economic and political problems facing this country and its citizens, they are the direct results of leaders that we trust exercising freedom of speech without responsibility, and encouraging their followers to do the same.

What will it take to stop this destructive tide? The precarious position in which we find ourselves as a nation, as a people, will require all of us to speak facts, truth, and doing it with the goal of trying to find a common ground, especially with those we may have disagreeing opinions. Wantonly exercising freedom of speech without responsibility is not the answer.